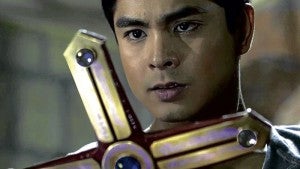 If American movies vamp on vampires, local TV-film productions counter with their fascination for aswangs.

The latest TV series about aswang-hunters started telecasting last Jan. 4—“Juan dela Cruz,” topbilling Coco Martin as a young man whose mother fought the fiendish, evil monsters of Pinoy folk culture—until she was impregnated by the king of the aswangs himself (Albert Martinez)!

This plot twist gives Coco’s titular character a thematically interesting character hook and internal conflict to develop: Since he’s a combination of good and evil genes, the eternal battle between those two opposing forces and basic human impulses is instructively embodied in his own contortedly conflicted person!

Now, we don’t know at this early stage of the series’ storytelling if this central conflict will figure all that significantly in its development and thematic focus. After all, on its opening telecast, the show appeared to be focused on gaining a youthful viewership, hence its cartoon-y opening sequence and excessive use of “fantasy” special effects.

As for its initial portrayals, Martinez was content to play it predictable, coming up with a depiction of the aswang nation’s king as a really scary ghoul.

Other “monster” portrayals were similarly horrific, making us wonder if this new series is appropriate viewing fare for very young children.

(We would really appreciate it if child psychologists would view “Juan dela Cruz” and evaluate its possible effect on young children from their more informed and experienced point of view.)

The question of appropriateness apart, the new teleserye is visually striking, and its early sequences about the birth and boyhood of its title character are emotionally empathetic, especially in their focus on the parish priest portrayed by Jaime Fabregas.

Since the priest knows about the boy’s potentially evil side, he is shown in one scene being tempted to snuff the baby’s life  out with a pillow, to save mankind from a dastardly fate, should the devilish part of the boy’s psyche eventually exert a dominant hold on him!

—Thank goodness, he comes to his senses and realizes that the innocent babe shouldn’t be judged and condemned for something that has not yet happened—and the armchair moral theologians at home nodded firmly in rapt agreement.

The opening telecast also introduced another child character, a boy aswang, who we figure will later present himself—as Juan’s most fearsome foe.

Subsequent telecasts of “Juan dela Cruz” finally  feature Coco Martin as the young-adult superhero, and the boy aswang is now a cop, the better to hide his evil nature.

As of last week, however, the skirmishes between the series’ good and bad guys have been quite predictable, with fantasy effects trying to make up for the general lack of inventiveness.

We hope that the show gets out of this rut real soon. The way to do that is not to keep adding more special effects, but to introduce interesting and empathetic relationships, which are what viewers want to keep tabs of.

It would also help if lead star Coco gets out of his overexposed “leading man” acting pose and style, and come up with an edgier approach to his pivotal role.

He still had it when he played twins in an early teleserye, but he’s lost it now that he’s become a full-blown mainstream TV-film star, with a new teleserye and a Valentine movie currently on view.

—Over-exposure exposes an actor’s limitations, that’s for sure.