Psy goes back to back with Ai-Ai tomorrow | Inquirer Entertainment

Psy goes back to back with Ai-Ai tomorrow 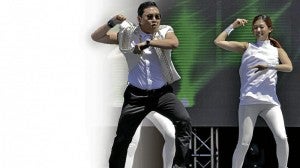 The Korean rapper’s concert, dubbed “PSY Live in Manila!,” was originally scheduled last Dec. 20 but was postponed due to logistical problems.

Psy became an international sensation after the quirky music video of his song “Gangnam Style” went viral on the Internet. He has also received a certificate from the Guinness Book of Records for the most-liked video on YouTube.

Can fans expect Ai-Ai to share the stage with Psy and be his “sexy lady?”

“I would love to, but it will depend on Psy and his management’s conditions. They’re quite strict,” said Ai-Ai, who’s headlining the “Tanging Family Valentine Show” that precedes Psy’s concert. “But if it doesn’t happen, then I guess I’ll just have my photo taken with him backstage!”

Serrano explained the two stars wouldn’t have enough time to rehearse since Psy will arrive in Manila on the day of the show itself.

It’s been more than two years since Ai-Ai held a solo concert. One of the things she misses most about being on stage is the spontaneous, carefree audience interaction that she doesn’t get from doing movies and TV shows.

“It’s great seeing a crowd having such a good time as you perform. And as an artist, there’s nothing like the feeling of being cheered on and applauded,”  she said.

Ai-Ai added: “I’m a bit nervous because, in a way, I feel like I’m starting all over again.”