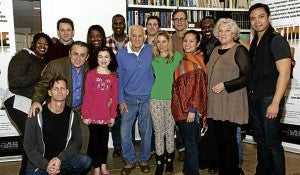 CAST includes (from right) Jose Llana, Tyne Daly and Lea, among others. broadwayworld.com

What a great way to start the week! On this fine Monday morning at the rehearsal hall of New York City’s National Opera Center, the full cast of “Ragtime” finally met. It was a moment I had been waiting for.

“Ragtime” is about three distinct family groups from three distinct cultural backgrounds—white Protestant family from New Rochelle; a black pianist, his lady friend and their son; and a Jewish father and his young daughter immigrating from Latvia. Among the characters are celebrities of the era—Henry Ford, Booker T. Washington, J. P. Morgan, Emma Goldman, Evelyn Nesbit, Harry Houdini—who somehow get involved in the lives of the principal players. Jose and I are clearly Asian (another Asian performer and fellow “Allegiance” cast member, Ann Sanders is part of the “Ragtime” ensemble); traditionally, we wouldn’t get cast in the roles we’re playing here. I’m playing Mother; Jose is playing Houdini.

Last fall, during the tech period for “Allegiance,” director Stafford Arima asked if I was interested in singing the part of Mother for this special concert. I had never heard the music of “Ragtime” before and I never saw it on Broadway. (I was either keeping  the same show schedule or away from New York.) However, I was aware that this Stephen Flaherty and Lynn Ahrens musical, with the book by Terrence McNally (based on the novel by E. L. Doctorow) was one of the most beautiful things ever created for the stage, and that it had won quite a few Tony Awards, including best score, and best featured actress in a musical for Audra McDonald.

I downloaded the musical from iTunes and listened to it straight through. A lot of my musical-theater friends had been raving about this—its story, its music, lyrics, orchestrations. I decided it was one of the most beautiful pieces I had ever heard. Each character undergoes a transformation. In the end, no one is the same person, they were at the top.

The day began with meeting a few members of the press. (I was under the weather with the head cold from hell and in no shape to prettify, so I wrapped myself in a bright orange scarf.) After a few snapshots  and interviews, it was time to get to work. Stafford said the staging of the prologue from the original production took about a week and a half. For this concert, we had only an hour and a half. No pressure.

As soon as everyone was singing together, the sound produced was magical. That room was a veritable melting pot—people of all races and backgrounds singing about the melting pot that was America in the early 1900s. The racial clashes at that time often resulted in deaths. Dreams were dashed, either by circumstance or human intervention, but there were also dreams that came true in a glorious way.

As far as this melting pot was concerned, I was reuniting with quite a few people. Aside from Ann Sanders, I worked with Norm Lewis in the “Les Misérables” 2006 revival and 25th anniversary concert in London; with Jose in “Flower Drum Song” (both in LA and New York) and during the “Allegiance” workshop in New York City a couple of years ago; with Aaron Galligan-Stierle in the 2008 “Cinderella” in Manila; with Jarrod Emick when he joined the “Miss Saigon” company as a member of the ensemble almost a year after it opened (he ended up playing Chris on the first national tour and won a Tony Award for the role of Joe Hardy in “Damn Yankees”). I worked with Tyne Daly at the Hollywood Bowl for a concert many moons ago, and with Howard McGillin at a Christmas reading (which I doubt he’ll remember). As for the rest, I have met a few or watched them on stage, shared mutual friends with even more. My worlds are colliding, and my many paths crossing, in a most lovely way.

We have, as I write, six rehearsal days to go before our big night at the Avery Fisher Hall in Lincoln Center. There is a lot more music to go through, a lot more story to read, but I am certain this will be a memorable experience for us. As a little Asian woman who never thought in a million years she’d get to sing this beautiful score, I am nothing short of grateful.

Now if you’ll excuse me, I have a head cold to get rid of.