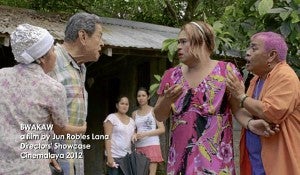 The film bagged the Emile Guimet award given by the Friends of the National Museum of Asian Arts of Paris.

“Bwakaw” also won the Grand Prix de Jury International and the High School Award, which is voted by students.

Written and directed by the much-awarded playwright-screenwriter Lana, “Bwakaw” tackles the story of a gay old man who lives alone with his pet dog.

“Bwakaw” is topbilled by Garcia.