Jessica Sanchez concert up against dozens of Valentine shows 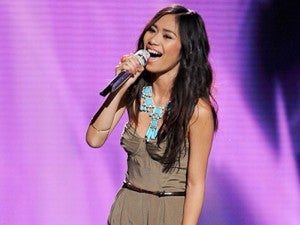 MANILA, Philippines – Jessica Sanchez is in town for a solo concert on Feb. 14 at the Smart Araneta Coliseum – a deal that was negotiated in September last year when the American Idol 2012 runner-up first came here to perform with her co-finalists at the same venue.

Her solo show, timed for Valentine’s Day, raises two important questions: Can she fill up the Big Dome, which has a capacity of about 10,000 for concerts? And, more crucially, can she actually hold a full-length performance that normally runs for about an hour and a half?

When she first came here on Sept. 21 last year to perform with the nine other Idol 2012 finalists including grand winner Phillip Phillips, a capacity crowd turned up at the Big Dome. Many in the audience apparently wanted to see her up close in person – a hometown crowd welcoming one of their own, since Jessica, who was born in the United States, has Filipino blood because her mother Editha Bugay’s clan hails from Samal, Bataan.

Jessica proved herself worthy of all the attention in that concert. She was in tiptop shape, her deep, booming vocals shining through in her solo spot numbers. Surely her Filipino fans are excited to watch her again.

Perhaps the only drawback is that her Valentine concert coincides with dozens of other shows that were scheduled specially for that day when couples go out on dates.

The question of whether she has the stamina to withstand the length of a full-length gig is a valid one, because all her past performances in the US had been guest stints, which consisted of two or three songs at the most.

In fact she sang only three songs during the Idols concert at the Big Dome, although she also provided backing vocals in six production numbers.

But then again, she knows how decisive her coming show is, and her handlers are professional enough to require her to rehearse hard – even as the presence of Idol 2012 seventh placer Colton Dixon as guest performer serves as an assurance that it would be an interesting concert.