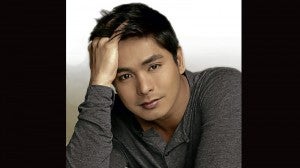 Thus the exchange started with perfunctory questions about the show and his role. Then, the subject shifted to his humble beginnings, his grandmother who raised him and then, yes, to politics.

Coco, who campaigned for Aquino in 2010, wasn’t shy to admit that he would support senatorial aspirant Edgardo “Sonny” Angara “for his concern for the elderly.” His simple explanation: “I’m a lola’s boy.”

“Aga was surprised,” Coco said. “We hadn’t even met at the time. But I [know] he helps people without publicizing what he does. We’re alike in that respect.”

Thoughtfully, the 31-year-old actor pointed out that, as a celebrity, every action he takes and every word that comes out of his mouth can potentially affect or inspire people, especially the young ones.

Other political hopefuls that Coco is supporting are Richard Gomez, who’s running for mayor of Ormoc City and Grace Poe-Llamanzares, who’s eyeing a Senate seat.

Would he himself be interested in a political career? “That has never crossed my mind. There are many other ways to help,” Coco replied.

If the press con was an indication of his stature in the network, then the multiawarded actor is one of the biggest, if not the biggest, and top-prized Kapamilya talent at the moment.

Held in a function room of a Quezon City hotel, the scale of the gathering was something one would expect for an all-star cast. Press people were treated to a four-course meal.

Whenever reporters called him “Prince of Teleseryes,” Coco would smile shyly and bow his head in embarrassment. He still feels like a struggling indie actor, he said.

“My humble beginnings have strengthened me; that’s why I’m here right now,” he said. “I cherish everything I have because I worked hard for each one.”

Nothing has really changed, Coco insisted. “I consider myself an ordinary person. I see the staff and crew on the set as my equals. When I make a mistake, they know they can call my attention or even tell me what to do.”

But success is not without sacrifice, needless to say. Juggling “Juan,” the movie “A Moment in Time” and a slew of other commitments, Coco is lucky to score four straight hours of sleep—and even luckier if he finds the time to bond with his grandmother, who lives with him.

“Sometimes, I just go home to take a shower, then I’m off again. We barely get to talk,” said Coco. Indeed, he went straight to taping after the press con.

His personal life will really have to take a back seat because he knows that show biz fame is fleeting. “People may soon lose interest in me,” he said. “I want to make sure I’ve done everything I can for my family when that time comes.”

Coco remains resolutely quiet about intrigues, especially those involving ex-girlfriend Katherine Luna and their seven-year-old daughter. So the closest we got to  personal details was getting him to say he was setting aside romance for now.

“A relationship will eat up the time I have for my family,” he said. “I don’t want to rush. I’m very happy with what I have now.”