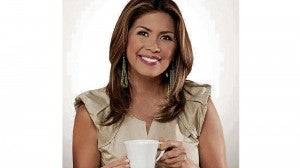 For a couple of weeks now, we’ve been looking for Edu Manzano on his new TV5 early-morning show, “Good Morning Club,” which he joined only recently as a co-host.

Alas, we’ve had such lousy luck: Twice, we caught only the tail-end of the telecast, and Edu did nothing much except smile and look handsome.

So, last Tuesday, we got up before 5 a.m. to catch the show in its entirety, hoping to finally be able to write about Edu’s impact on the program as its latest cohost.

Alas, Edu didn’t show up that day. (Later, we learned that he appears on the show only on M-W-F.)

We still hope to catch Edu on his latest show, no matter how long its takes. But, last Tuesday, we consoled ourselves with the thought that we could still share with our readers what TV5’s early-morning program was all about even without Edu. —Here goes:

The best part of the show that day, in our view, was its “How To” segment, hosted by Chiqui Roa-Puno. Last Tuesday, she taught viewers how to change a doorknob—something that klutzes like us would never even dream of attempting to do.

But, Chiqui was such a good teacher that we finally saw the light—and know what to do the next time a door goes knobby on us at home!

Seriously, we appreciate the show’s “How To” portion because it makes viewers feel confidently self-sufficient, no longer dependent on home repair people who charge an arm and a leg for their services.

The portion is specifically intended for housewives whose husbands aren’t around, so that’s another plus, empowering women to be less dependent on their menfolk to solve basic—and advanced—problems, from day to day.

We also liked the portion in which Chiqui and Tintin Babao explained to viewers how to decipher and make good use of the “nutrifacts” information on food product boxes and cans. They did it so clearly that it finally made sense to us.

So, even without Edu, TV5’s “Good Morning Club” turned out to be a viewing treat. It’s less hysterically “fun” in its approach than some other early-morning programs, and that’s such a relief—because, who wants to wake up at dawn with 10 or 12 hyper cohosts screaming into our vulnerable ears?