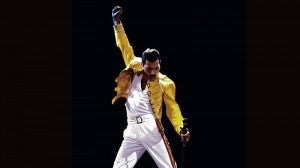 LOS ANGELES—“I’ve got to hit the high notes. I’m buying those tight underpants,” Sacha Baron Cohen cracked about his coming role. He will play the Queen’s legendary frontman, the late Freddie Mercury, in a film to be directed by Stephen Frears and cowritten by Peter Morgan, both of whom gave us an award-winning film on the other Queen.

“I will be singing,” confirmed Sacha, a little more seriously this time. It was our first time to interview Sacha as himself. In our previous chats, he came fully costumed—as Borat, Bruno (he almost gave us a lap dance) and The Dictator. Each one was a hilarious session. But even talking as himself, Sacha was just as funny.

The Brit’s Borat moustache helped him land the role of the rock god, he joked. “I think that was the main reason that I got chosen,” Sacha said. “They don’t want to spend too much money on prosthetics and [fake] moustaches. That I can grow my own is going to be very significant.”

Sacha does not need to buy tight underpants right away. “We’re in the early days; we’re still working on the script,” he said of the untitled film to be produced by no less than Robert De Niro and Freddie’s former Queen bandmates, guitarist Brian May and drummer Roger Taylor, among others.

But Sacha was clear that the film will not cover Freddie’s entire life. “At the moment, it’s more about the… period of his life leading up to Live Aid and a bit after Live Aid.” Cowriting the screenplay with Morgan are Stephen J. Rivele and Christopher Wilkinson.

“The story of Freddie Mercury is fascinating,” the actor said. “He was a really interesting character. He had these incredibly traditional parents, who he didn’t come out to. He had a wife. He was one of the early celebrities who had to deal with getting AIDS in an era when it was a death sentence. He carried on performing—until the very end.” 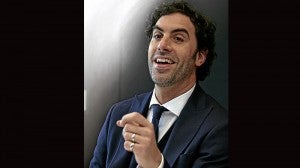 SACHA Baron Cohen: “I think I was chosen because I could grow my own moustache.” RUBEN NEPALES

This biopic will only be Sacha’s seventh major feature film. “I can do only what I’m passionate about,” he declared. He enjoys film work so much, he considers it a hobby. “It’s not really a job. So, I don’t work much. That’s why I’m drawn to projects like this one.”

Fresh from his role as Thenardier in “Les Miserables,” where he and Helena Bonham Carter provided the comic relief, Sacha stressed that he does enjoy singing. “I have a gold record award on my wall in England, which I got when I was Ali G… the highest selling English rapper.”

Laughing, he quipped about his early incarnation on TV as a gangsta wannabe. “There were no other English rappers. For a while, people actually thought Ali G was real. They thought that was my main profession.”

Sacha’s love for music also made him go for the singing role of Pirelli in Tim Burton’s “Sweeney Todd: The Demon Barber of Fleet Street.” He recounted: “When I was in university, I did ‘Fiddler on the Roof’ and ‘My Fair Lady.’ My brother (Erran Baron Cohen) is a musician. He composes all the music for my films. So music has always been very integral to my work. I love getting the soundtrack together and getting very involved in the composing of the score.”

“Les Mis” was a good warmup to the rigors of singing a la Freddie, whose voice is in full showcase in the Queen’s most famous song, “Bohemian Rhapsody.” On Tom Hooper’s hit adaptation of the musical, Sacha volunteered: “I was singing 12 hours a day, doing 40 takes a day. Within three weeks, I lost my voice. Tom said, ‘We’re going to have to shut down the movie.’ I said, ‘Why? I will just lip-sync like in every other musical.’ He went, ‘No, this movie has to be sung live.’ I said, ‘No one cares. Who’s ever going to find out?’ He shut down the movie.”

He continued: “Tom sent me to the Royal Academy of Music head, and to the top ear, nose and throat surgeons in England. I was put on ‘voice rest,’ which means you can’t say a word. You’re not even allowed to whisper. You can’t say hello or anything. I had to communicate by writing stuff down, which was incredibly difficult, particularly when I was having a phone conversation (laughs).”

Sacha revealed the challenge that he faced essaying the thief and innkeeper Monsieur Thenardier on the set: “The problem with that role is that so many people have done it before. The stage [version] has been going on for 20 years, or more like 300 years. Many in the cast and extras of this film were old members of ‘Les Miserables,’ the show. There are about five or six Thenardiers who have done it all on the West End and who came up to me, going, ‘The way you should really do Thenardier is… you spit a bit…’ They’re all giving me their ‘definitive’ Thenardier ideas. It’s difficult to make it your own.

“When Tom first asked me to do it, I said, ‘Can I play around with the script a bit? Can I change words? He said yes. It turned out he was totally lying. On the first day, I go, ‘I’ve got all these new lines for Thenardier.’ He ran it by Schonberg, who wrote the music. Schonberg said, ‘Absolutely no way. It has worked for over 20 years. Why are we doing it (change) now?’ They wouldn’t let me change a line. I only managed to change a few words [and] I had to clear it with Schonberg, Cameron Mackintosh and the writer.”

Sacha’s connection to “Les Mis” goes way back. “I used to listen to the songs when I was a kid because I saw the first production in the West End, which was pretty good,” he recalled. “At the age of 14, I bought the album. I thought, wow. It was catchy even for a 14-year-old. I always loved that song, ‘Master of the House.’ So it was a great honor to sing it.”

Before he hit it big with “Borat,” Sacha struggled. “For many years in London, I was an extremely unsuccessful actor,” he related. “As a result, I had a variety of ridiculous jobs. One was as a host of a nightclub for a lot of people who took Ecstasy (party pills). There used to be a lot of Ecstasy clubs in the ’90s. I didn’t take Ecstasy. I was the guy who played the bongos and kept the energy for about 10 hours.

“That was in the main crack- selling area in Brixton. It was called Coldharbour Lane. I used to dress up each week in ridiculous outfits—like, as an 18th-century French courtier in pink silk. These guys who are off their heads on crack would see me walking down the street at three in the morning.

“I was struggling. At the time in England, when I went into acting, it was a way of saying, ‘I don’t care about money. I want to do this for my own profession.’ I never thought for a moment that I could earn anything from being an actor. Everyone who was in that profession in England was penniless. So, it was assumed that I would not get any money. If anyone lent me a bit of money, I appreciated it.”

A bit of fame

Sacha’s salvation came in the guise of his invention, the satirical Ali G. When he started rappin’ he made enough money to even… gain weight. “I thought, wow, this is great. I went straight to the supermarket and I bought everything that I couldn’t buy before—all the nice cheeses. Within the first six months of getting a bit of fame and money, I put on about 20 pounds. When anyone wanted a meeting, I’d go, ‘Alright, we’re going to a restaurant? Great!’ I became quite fat very quickly.”

We wondered how Sacha’s wife, actress Isla Fisher, copes with his daring, ribald humor. “She’s very tolerant,” Sacha replied. “Once when I was shooting ‘Bruno,’ there was a scene where Bruno met a dominatrix. She was told by the director, ‘If you manage to have sex with him, we’ll give you $300 extra dollars.’ So she did everything she could to try and have sex with Bruno. She pulled out a belt and started whipping me. I came home that night covered in welts [and] bleeding all over my back. I had a broken thumb because the woman kicked me. It was an average night for me.”

With a smile now, Sacha dished, “The amazing thing is, my wife puts up with that. She goes, ‘How was work, honey?’ She came visiting the set once when we were shooting ‘Bruno.’ I ended up having to run away from the police and hide in a parking lot. She’s a tolerant woman.”