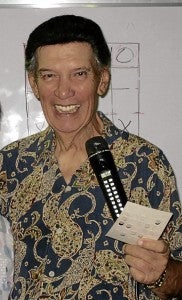 TRUE-BLUE entertainer performed at the Christmas party of the Senior Citizens’ Association of Laging Handa (Scala) in 2010. ELSIETIAMPONG.WORDPRESS.COM

Pimentel passed away on Thursday. He was 82. (He was found lifeless in the bathroom of his home by wife Cecil.)

Ordoñez, who co-hosted the long-running game show “Kuarta o Kahon” with Pimentel for 11 years, told the Philippine Daily Inquirer that she would usually call him on his birthday on April 27, just to keep in touch and thank him for teaching her the basics of hosting.

AMY PEREZ says she learned “everything” about hosting from Tito Pepe.

“He taught me the importance of not upstaging your co-hosts, of not talking at the same time as a fellow host,” Ordoñez said. “No overlapping, he would always say. He was a consummate professional.”

“Kuarta o Kahon” was one of the most durable shows on local television, airing from 1977 to 1998.

Perez likewise credited Pimentel for sharing with her “everything” she now knows as a host. “He believed in me and encouraged me. He would always remind me: ‘Look at and play with the audience. That’s the secret of being a good host.’”

Boots Anson-Roa, who worked with Pimentel in “Student Canteen” from 1965 to 1966, related: “Beneath the clown’s façade, Pepe was a serious student of life.”

Stand-up comic Willie Nepomuceno said that not too many people remember that Pimentel was the first national champion of the amateur singing contest “Tawag ng Tanghalan” in the 1950s—a decade before Superstar Nora Aunor emerged as champion. 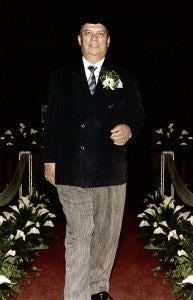 TITO Pepe Pimentel was principal sponsor at the Ordoñezes’ wedding in 1991. PHOTO COURTESY OF ENCAR BENEDICTO-ORDOÑEZ

GMA 7 chairman and chief executive officer Felipe L. Gozon said that he would remember Pimentel most for his flair for comedy and belting out “Spanish songs.”

Singer Celeste Legaspi thought his voice was “beautiful, especially whenever he sang the Spanish ditty ‘Granada.’”

Nepomuceno described Pimentel as a “true-blue entertainer. He brought his TV persona everywhere he went. It was as if the camera was constantly on him. He made sure to make every onlooker giggle or smile.”

Comic Jon Santos, who started in show biz as an assistant on “Tayo’y Magsaya,” Pimentel’s ABS-CBN noontime show with Sylvia La Torre in 1987, recounted: “He was my first boss. He gave me my first lessons on spoofing songs. He used to perform a Japanese-themed novelty song, with lyrics consisting of brand names of Japanese appliances strung together ‘Hitachi, Toshiba, etc.’ He sang it to the tune of ‘My Way.’ He was a gifted singer.” 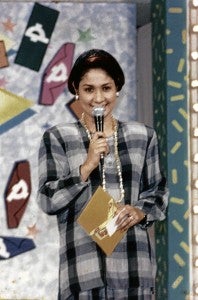 Santos said that Pimentel was the master of the “Pinoy game show.” “He possessed the most important weapon in contests: Control. Control over mechanics, control over the quality contestants and, of course, control of the banter and repartee. Tito Pepe told me about professional contestants—people who have made careers out of joining game shows on TV.”

He was a gracious coworker, said Seiko head Robbie Tan, who produced “I Won! I Won!”: “He had a knack for remembering names. ”

Although his signature joke was making fun of his late mother-in-law, “he was a devoted son-in-law,” Roa said.