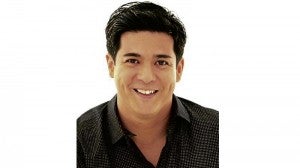 We’d run out of space if we listed down the many Filipino celebrities who have managed to parlay stellar appeal into political gold—there’s Joseph Estrada, Vilma Santos, Bong Revilla, Tito Sotto, Herbert Bautista and pugilist Manny Pacquiao, to name a few.

Even movie king Fernando Poe Jr. figured in a contentious political tussle in 2004 (for the country’s presidency, no less), as did screen icon Nora Aunor, who missed her bid for a gubernatorial post (in CamSur) in 2001.

True, some actor-politicians are better than others, so it isn’t right to generalize our bias against them—after all, as the theory of pluralism posits, a country’s political equilibrium is based on the existence of diverse and competing interests.

Like the Superstar before him, Aga Muhlach wants to serve the people of Camarines Sur in Congress. The 43-year-old heartthrob was surprisingly combative when we talked to him early this week, explaining that he was merely defending himself against the issues hurled at him—from his alleged Spanish citizenship to his lack of residency in the municipality of San Jose.

Aga discloses, “Sometimes, Charlene (Gonzales) and I would look at each other and say, ‘Masarap naman ang buhay natin—why are we doing this?’ How can I prove myself if they don’t let me? Let me serve, and if you’re not satisfied, you can get rid of me after three years! In politics, your decisions are crucial because you’re dealing with people’s lives!”

Years ago, Aga shared with us his dislike for politics. What made him change his mind? He answered this when we talked to him last year, when he was promoting his acclaimed starrer with Regine Velasquez, “Of All The Things”: “Effective leadership starts with a happy home. I don’t see why I should get into politics if my intentions aren’t good. I know I can do more than just entertain people—I want to do something more concrete.”

Win or lose, the actor says he won’t stop acting, but “lalo pa akong magiging choosy sa tema ng mga pelikula ko. Even when I do a rom-com, dapat mas may kabuluhan—because I also have to grow up!”

Among actor-politicians, who does he want to emulate? His quick reply: “Vilma Santos is one of them. She gave me wise advice: ‘Just be yourself, and you’ll be fine. Don’t be somebody you’re not—people like you for who you are.’”

What’s his next move? Aga flashes his bedimpled smile and says, “For now, my immediate target is to lose weight (laughs)!”