Ang Lee delivers his most imaginative film to date 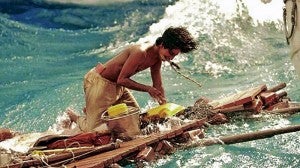 “LIFE OF PI.” Equipoise between creative excitement and meditative insight.

Moviegoers bored with the same old ways of telling stories on the big screen should watch Ang Lee’s latest film, “Life of Pi,” because it finds its own voice in narrating its unique tale about, among other incredible events, how a teenager survives a shipwreck on a dinghy, with a ferocious tiger as co-passenger!

Is he telling the truth, or has his long ordeal fried his brain and hyped up his memory? We’ll never know for sure, but our best bet is on the former, since the details he provides are so charged and indelible that they beggar the pale and niggardly narratives of tame “reality.”

With “Life of Pi,” Ang Lee establishes himself as the most serially surprising filmmaker in mainstream cinema, constantly reinventing himself to come up with movies as visually and thematically varied as “Crouching Tiger, Hidden Dragon,” “Brokeback Mountain,” and now, his most imaginative film of all, “Life of Pi.”

Each time around, he tackles a new concern or issue, so what has driven him to tell Pi’s story (based on Yann Mortel’s best-selling book)?

Among other things, his movie celebrates the awesome wonders of nature and creation, man’s courage and ability to survive despite the greatest obstacles and most “impossible” odds, and the unlikely bond that binds all creatures, including a 16-year-old orphan and a hungry tiger who’s bent on eating him in order to live!

Now, what could a hungry tiger and his next meal possibly have in common? The answer to that seemingly “trick” question is the movie’s most inspiring plot twist, affirming some searchers’ life-long ambition to become one with the universe.

That’s right, “Life of Pi” is more than just a visually stunning film that tells an “impossible” story, it’s a philosophical, meditative and theological journey and encounter that gets down to the core of human existence, where we are most vulnerable and potent.

The film excites the viewer with its promise of potential unity with the cosmos and the Godhead, while it enables him to meditatively ruminate on the essence and meaning of life itself.

It’s the equipoise between creative excitement and meditative insight that the film achieves that makes it such a moving experience!

Naturally, the usual suspects will scoff at the film’s message of hope, and side with the realists or cynics who dismiss it as merely a fantasticating story for children.

But, others will passionately disagree, so Ang Lee’s narrative can become the springboard for their own leap of faith into the very heart of the lotus flower that is “the believing imagination” that philosophical voyagers seek to embody.

On the debit side, the film relies too much on narration, so some of its elements come off as second-hand, rather than fresh and vital.

Ironically, too, some of the movie’s images are so splendiferous that they end up distracting viewers from the story’s message of hope, faith and integration that should be its most potent driving force.

But, these are relatively minor distractions that are soon overwhelmed and “overruled” by the productions’ more numerous virtues and wonders.

The film’s other strong point is the high thespic level set by its performers. Aside from its young lead, Suraj Sharma, who turns in a brilliant debut portrayal, the Indian actors who play his parents (Adil Hussain, Tabu) are hugely gifted.

If this is an example of “world cinema” in action (Ang Lee himself is Sino-American), let’s have more of it!