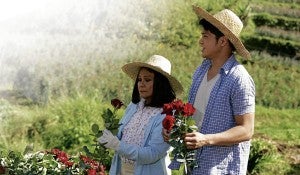 NORA Aunor with onscreen son Vin Abrenica on the set of the TV5 soap in La Trinidad, Benguet

Aunor and the male lead cast of the drama series sat down with reporters at the Manor Hotel here on Sunday night as Baguio was experiencing one of its coldest nights this month.

The superstar, who came wearing a bonnet, sweater and leather boots, said the cast enjoyed their two-day shoot in Camp John Hay and the rose gardens of Barangay Bahong in La Trinidad Valley, Benguet.

“Never Say Goodbye” is about two young lovers—a rich girl and a poor boy—who fight hard to keep their relationship.

“The shoot went fine, the scenes were good and the young actors performed well,” Aunor told the Inquirer.

Aunor said she was moved by the commitment shown by the younger actors in “Never Say Goodbye,” her second teleserye for TV 5.

Abrenica, who is Albert’s love interest in the series, said he has developed a strong bond with Aunor, who plays his mother.

It was Abrenica’s first teleserye project and his first scene with the “Superstar” was memorable.

“Sa first scene ko, sinampal nya ako (she slapped me) because I was being rude to her. But after we shot the scene, I felt super comfortable with her, parang nanay na talaga at parang anak na niya talaga ako (She’s like a mother to me as I am a son to her). She’s a superstar but she always talks and mingles with us,” said Abrenica.

Guzman, 23, calls Aunor “Nanay” even outside the set.

Earning recognition in the Golden Screen Awards as the winner of the best performance by an actor in a leading role in the indie film, “Ligo Na U, Lapit Na Me,” Guzman is considered by his fellow actors as a veteran in the set.

It’s his second time to work with Aunor after being cast in “Sa Ngalan ng Ina,” the supertar’s first miniserye on TV5.

“Ms. Aunor always has a unique [technique] in her acting, and she’s really like a mother to me,” Guzman said.

Montano said his “Nanay Emma” (his mother) is an avid “Noranian.”

“The first Nora Aunor film that I watched with my mother was ‘Erap is my Guy’ in 1973,” he recalled. “My mother was a member of the Seventh Day Adventist, and there are so many things that you are not allowed to do when you are a member [of this group], one of them is watching movies. But because of Ate Guy, my mother broke that rule—we watched the movie in [a cinema in] Paco, Manila,” Montano said.

He went on: “Every Sunday, it’s PBA (Philippine Basketball Association) versus ‘Superstar’ (Aunor’s defunct show) on television. There’s always a fight over the TV because we wanted to watch the basketball match between Crispa and Toyota and my mother wanted to watch ‘Superstar.’ Of course, she won because she bought the television. We would get to watch the match only during commercial breaks,” he said.