BB wants to be known as a serious actress 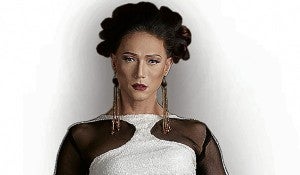 As TV camera crew and other reporters stumbled all over themselves, chasing BB Gandanghari for a sound bite during a recent gathering, the controversial star was the first to point out: “I want to be known not just for my airport arrival interviews.”

It’s because it has become de riguer that every time BB returns from the United States, she would have a bombshell to dish out for the media waiting for her at the airport.

At the press conference for her latest play “Halik ng Tarantula,” it seemed BB’s plea fell on deaf ears—as persistent questions about brother Robin Padilla’s perceived disapproval of her transformation incessantly cropped up.

With the doggedness of a worker ant, however, BB would keep repeating that she wanted to be known not as a curiosity, but as a serious working actress.

Amid concerns that her family would be scandalized by the steamy scenes in the play, which is based on Manuel Puig’s novel “Kiss of the Spider Woman,” she quipped, playfully: “It’s not like this is a live sex show. This is legitimate theater.”

BB related that mom Eva Cariño was initially apprehensive when she saw the play’s risqué poster (which shows an apparently nude BB sitting on top of an equally naked mystery man).

BB recalled: “But then I shared the play’s story with my mom. After a while, she asked me: When are the play dates again?”

So will the entire Padilla clan show up at the Teatrino in Greenhills on March 7, 8 and 9?

“I wish they would see it. It’s not something that I should hide from my family.  But I don’t want to push it because I know each person has his own principles,” she explained.

There shouldn’t be a big fuss about the kissing scene either.

“For me the kiss represents love and acceptance,” BB said.

The play’s director Soxie Topacio pointed out that everyone, especially her family, should see the play for it would give the audience a glimpse into BB’s private pains.

The director previously worked with BB as coactor in the play “Sayaw ng mga SENIORita,” which went onstage at the Cultural Center of the Philippines during the National Theater Festival last November. “In ‘Sayaw,’ we just had fun. But in ‘Halik,’ BB will be able to express all the emotions she had been keeping bottled up inside her for so long,” said the director.

‘Cathartic’
BB agreed that the play is “cathartic” for her.

“That’s the beauty of theater. Onstage, I am allowed to talk about issues I feel strongly about through a character I am playing. I am able to communicate my innermost feelings but it’s not coming from me. In a way, being an actor is a lot like being schizophrenic,” she remarked.

Asked to comment on Hollywood actress Jodie Foster’s big coming-out speech at the Golden Globe awards, BB said: “Even someone like Jodie Foster felt the same way. She went around with a big question mark over her head. People were judging her or were curious … So she said it once. She came out and she was not promoting a movie or anything.”

US trips
BB confessed that her trips to the US allow her a semblance of normalcy. “I am able to keep my balance in New York. I can go around without makeup. I do the groceries. I clean the house. I take the subway which is hard to do in high heels ha.”

She could also “date” freely. She recently met an Irish-American model who, she hopes, would fly in to watch the play.

In the US, she consults a psychologist to help prepare her emotionally for a possible gender reassignment procedure.

She said she has become more open now—particularly, about her wish to undergo such procedure—precisely because of her therapy sessions with her psychologist.

Mood swings
“I had been taking hormone pills but stopped because of the mood swings. It’s a long process and my psychologist guides me every step of the way. At first, he was worried that I was in a rush. He told me to take it easy. He’s glad that I keep myself busy with different projects,” BB said.

Apart from acting in the play, she is also its producer, as head of BB Gandanghari, Inc. (BBGI).

“I’m also thinking of doing a film. Maybe another play. Or another TV show like ‘Enchanted Garden.’ I have so many plans under BBGI. But I’m taking it slowly,” she said. “One day at a time.”

Read Next
Playing gay is on to-do list of award-winning actor Ronnie Lazaro
EDITORS' PICK
TNT nears PBA crown after rout of Magnolia in Game 4
Work-From-Home is here to stay and requires reliable logistics
Legarda emphasizes role of ICC/IPs in nation building this IP month
Renewal of driver’s license now requires taking LTO education seminar
PH still at bottom of COVID-19 economic resilience ranking
Climate Change Commission and Nestlé PH to discover sustainability-focused solutions
MOST READ
Drivers now required to take driver’s education upon license renewal – LTO
Marcos Jr’s ‘special diploma’ from Oxford: You can have it, too
OVP spox to Imee Marcos: Robredo is an extraordinary lawyer
Don’t do that: Robredo to supporters calling to boycott restos supportive of Marcos
Don't miss out on the latest news and information.