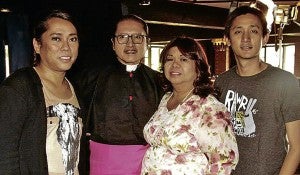 ON THE set of “Juana Change the Movie” (from left): writer-producer Raymond Lee, actors Ronnie Lazaro and Mae Paner and director Jade Castro

Lazaro told the Philippine Daily Inquirer that his latest transformation, as a high official of the Catholic church, was a breeze.

But who was his inspiration for the unlikely archbishop role?

“If the scene was about a priest who receives a Pajero as gift, then I guess it’s a giveaway. But it’s a statement on the religious who have become materialistic,” he explained. “That they are also human.”

It’s not the first time for Lazaro to push himself as an actor.

For Benito Bautista’s “Boundary,” he portrayed a taxi driver even though he loathed motoring around Manila’s chaotic streets.

“I interviewed taxi operators and talked with cab drivers to prepare for the role,” he recalled.  “I wanted to tell their story as accurately as possible.”

If you ask Lazaro, however, the brass ring remains elusive: Playing a gay character.

He was supposed to play a drag queen in Richard Somes’ “Mariposa (Sa Hawla ng Gabi),” but scheduling conflicts got in the way. “I had already done my research. I was ready to play an all-out woman and had tried to figure out how to walk in high heels.”

While being gay remains in his to-do list, he was able to cross out another long-cherished dream.

Lazaro had his start in the biz on the popular gag show “Champoy,” which also featured Mitch Valdes, Cherie Gil and Tessie Tomas, in the 1980s.

Lazaro finally got to attain a life-long goal on the set of “Huling Biyahe,” an entry in the second Sineng Pambansa, mounted by the Film Development Council of the Philippines in Davao last November.

“Well, it’s a lot better than having a bed scene with (another “Champoy” comic) Gary Lising,” Lazaro joked. “It was easy because Tessie and I are friends.”

Sanchez is currently subtitling “Huling Biyahe,” which he hopes to send to festivals abroad.

“Huling Biyahe” will be shown at the Iloilo Film Festival, to be held in SM Iloilo from Jan. 24 to 25. Sanchez hopes to set its  theatrical run in next month.