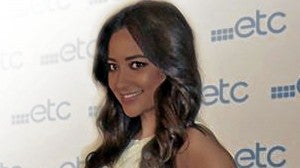 Mitchell, 25, was “very excited” during the press con at the Makati Shangri-La. The daughter of a Filipina and an Irish-Scot, Mitchell appeared on the long-running series “DeGrassi” and the fantasy show “Aaron Stone” prior to landing the role of Emily Fields, one of the main characters in “Liars.”

Proud of her brown skin, Mitchell revealed during the event that she didn’t care for whitening creams or using umbrellas during hot days. She talked about loving turon (“I can eat 10!”) and halo-halo.

On my first meeting with [producer] Marlene King, she was like, “You know your character is beginning to deal with being bisexual, maybe be a lesbian—are you okay with that?” I’m like, “Yeah!” It never mattered to me. Love is love; that’s what I believe. A lot of fans’ reactions have been, “Thank you so much for playing this character and standing up for something!”

Everything in moderation. I don’t diet that much. It’s important to enjoy life. If you put a Filipino dessert in front of me, I’m going to try it! I work out a lot but I also love eating.

What is the role teaching you?

When the character wasn’t allowed to tell anybody that she was gay or that she even had these thoughts, it was extremely hard for me. I could imagine all the girls and guys who are afraid to come out. That’s terrible. That’s one of the things that I really felt while playing the character.

How is your bond with the other girls?

It’s absolutely amazing. We’re all like sisters; that’s how it really is. Ashley (Benson) and Lucy (Hale) are my little sisters, they’re little pranksters, and Troian (Bellisario) is the one I ask for advice. It’s really fun; I feel lucky to work with such a great cast.

How do you unwind?

Stay in bed, literally! I’ll watch a movie or Skype with friends… I’m quite a homebody. I don’t go out that much. I feel like I got partying out of my system when I was a lot younger. Now I move like a grandma: “Ooh, it’s 10 o’clock; let’s go!”

Have you read the books (“Pretty Little Liars” series) and how different is the TV version?

I read those right away with the other girls… eventually we had to stop because I think it got a little confusing… It was interesting because the character in the book had red hair, fair skin and freckles— not really what I look like! They were casting for that “girl next door.” I’m really proud of being given that chance. “Girl next door” isn’t just blond hair, blue eyes anymore.