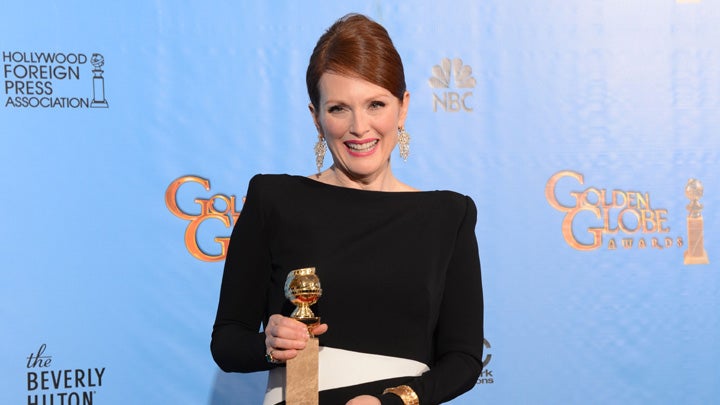 Actress Julianne Moore poses with her Best performance by an actress in a mini-series or motion picture made for television award for “Game Change” in the press room at the Golden Globes awards ceremony in Beverly Hills on January 13, 2013. AFP /ROBYN BECK

BEVERLY HILLS, California – Premium cable networks Showtime and HBO fought it out for supremacy in the Golden Globes TV awards Sunday with multiple honors for the CIA thriller “Homeland” and “Game Change,” the movie about Sarah Palin’s rise as the 2008 Republican presidential candidate.

“Homeland” won the Globe for best TV drama for the second year in a row. Damian Lewis, who stars as Sgt. Nicholas Brody in the ShowTime series, was honored as best actor in a drama and emotionally dedicated his award to his late mother.

Alex Dansa, executive producer of “Homeland,” recalled an arduous night of filming where star Claire Danes, eight months pregnant, had to do multiple takes being chased in a drainage pipe.

“We fairly killed ourselves trying to live up to the hype of that first season and this award tells that maybe, maybe, we didn’t screw it up,” he said.

Lewis said the last 18 months working on “Homeland” have been “an exciting, wonderful journey.”

“To pick up a piece of hardware like this is a great perk,” he said.

“Game Change” was honored as best television miniseries. Julianne Moore, best actress winner for a miniseries or movie, called the experience great fun. Jay Roach, executive producer of the series, said Moore was brave to take on the role of a political polarizing figure in the film, which balances her appeal as a sudden national figure and the chaos backstage in the campaign.

“Now with you and Tina Fey, we have three of the most incredible impersonations of Sarah Palin,” Roach said, “counting Sarah Palin.”

Moore made it a point to thank Fey, Sunday’s Golden Globes co-host known whose indelible Palin skits on “Saturday Night Live” enlivened the 2008 campaign, and newswoman Katie Couric, who had a contentious interview with Palin that year. She did not thank Palin.

Veteran actress Maggie Smith, who plays Violet Crawley, the Countess of Grantham in the PBS period piece “Downton Abbey,” won as best supporting actress in a TV series. She wasn’t in California to receive her award.