The 1st CineFilipino: From Joma to Kitchie 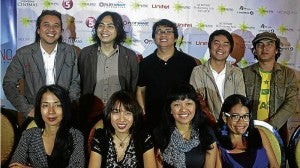 Organizers are delighted that the eight entries in the first CineFilipino Film Festival are “diverse, novel” and offer fresh points of view.

Mounted by the PLDT-Smart Foundation, MediaQuest, Studio 5 (film arm of TV5) and Unitel Entertainment, CineFilipino hopes to make a difference in the current movie scene, that has been enriched by such indie events as Cinemalaya, Cinemanila, Cinema One, the New Wave section of the Metro Manila Film Festival, Sineng Pambansa, and recently the Quezon City Film Festival.

Each of the eight projects in the CineFilipino lineup will receive P1.5 million. Festival director Vincent Nebrida said they were chosen from 145 entries.

Nebrida pointed out that the screening committee had inadvertently come up with a list that was equally divided among four newcomers and four experienced filmmakers.

The first-time feature filmmakers are Perez, Bernardo, Longjas and Alcazaren.

Bernardo and Perez have made short films in the past, but are making their feature-film debut with CineFilipino. Alcazaren is a veteran in advertising, while Longjas has directed school plays and works as production staffer in commercials.

The four seasoned filmmakers—Bautista, De Guzman, Bryant and the Dalena sisters—have previously made films under Cinemalaya, Cinema One and Cinemanila.

Nebrida noted that four of the directors are women: Bernardo, Perez and the Dalenas.

Interestingly, a documentary, “The Guerrilla is a Poet,” which tackles a chapter in the life of controversial political figure Jose Ma. Sison, has made the final list.

“The Muses” will feature the music of rock singer Kitchie Nadal, who is the film’s lead star as well.

A separate short film section will showcase 10 finalists. The finalists will be announced on March 29.

The festival is scheduled from June 26 to July 2 at the Ali Mall, Gateway, Eastwood and Newport cinemas.