‘The Hobbit…’: Much more than expected

Ian McKellen and the dwarves in “The Hobbit”

You would think that, after the “The Lord of the Rings” film franchise, filmmakers would give the Hobbits and their fantasticating adventures a good, long rest. But, viewers’ interest in the frisky, pint-sized charmers remains high, so why not (profitably) give them more and more of what they want?

Just in time for Christmas, the new movie “The Hobbit: An Unexpected Journey” was shown in local theaters, and the screening we caught recently proved that there’s more movie moxie left in the “extended” film franchise.

This time around, the focus is on a hobbit, Bilbo Baggins, whose placid life is shaken up a lot when Gandalf the Grey, the winking wizard, decides to take him way away from his comfort zone, on an exciting but dangerous adventure to retrieve part of the immense and priceless treasure hoarded in a lost kingdom by the ferocious dragon, Smaug, that conquered it two generations ago.

Gandalf’s small “attack force” is made up mostly of dwarves, but it also includes Thorin, the conquered kingdom’s grandson and heir.

He looks down on Gandalf’s hobbit friend, so the “Interloper” has to prove himself by saving his life much later in the story.

For his part, the hobbit resents Gandalf’s decision to shake up his life by exposing him to great risks. Later, however, he realizes that the wizard has done him a big favor, because he’s been forced to discover the unseen and unrealized hero within himself.

This is one of the movie’s central themes that its producers hope will impinge on viewers’ self-image as well. No, they need not engage dragons and other gigantic monsters in deadly battle, but they should be open to the many possibilities that life has to offer!

The film’s best suit is its seemingly unending series of creative and imaginative visualizations, including some truly lovely vistas that linger in the mind’s eye long after the viewer leaves the theater.

Also quite attractive and exciting are the different colorful characters, both villainous and heroic, that the production conjures up.

Best of all, “Hobbit” is funnier than the “Lord of the Rings” films. Taking its cue from the fact that many of its key characters are dwarves, it skews its storytelling closer to the “Snow 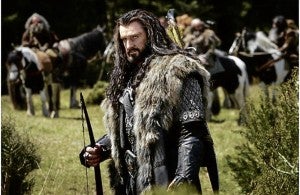 White and the Seven Dwarves” matrix, where each of the heroine’s tiny protectors is imbued with a droll quirk or two.

The movie is perhaps 20 minutes longer than it should be, but its storytelling is so brisk and diverting that we don’t feel the onus of its excessive length all that much. Well, we do notice that its key encounter with Gollum is too extended to be crisply droll, but the fascinating creature has become a star and icon in his own right, so more than the usual attention should be paid.

On point of digitized visuals, “Hobbit” hits a prodigiously high level of achievement with its truly fantastic finale, which features what appear to be hundreds of writhing blobs, in a hideously mordant mural straight out of Heironymus Bosch. Given its potentially redundant “prequel” conceit, “An Unexpected Journey’s” virtues and graces are truly more than expected!