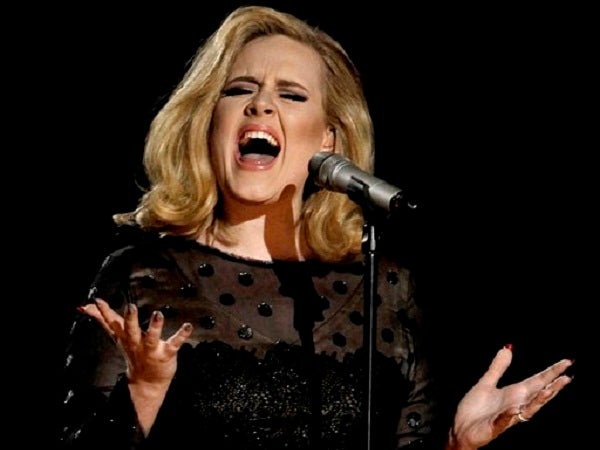 In this Feb. 12, 2012 file photo, Adele performs during the 54th annual Grammy Awards in Los Angeles. The British singer’s “21” was the highest-selling album in the U.S. for the second consecutive year, according to 2012 sales figures released by Nielsen SoundScan on Thursday, Jan. 3, 2013. That’s a first in the SoundScan era. (AP Photo/Matt Sayles, File)

NASHVILLE, Tennessee—Turns out Adele ruled 2012, too — and set a record while she was at it.

The British singer’s “21” was the highest-selling album in the U.S. for the second consecutive year, according to 2012 sales figures released by Nielsen SoundScan on Thursday. That’s a first in the SoundScan era.

Adele sold 4.4 million copies of the album in 2012 after selling 5.8 million in 2011. She crossed the 10 million threshold in November and was only rivaled by Taylor Swift, whose “Red” was second on the list. If her album sales continue apace in 2013, ’21’ will move into the top 10 list for sales since 1993, when SoundScan began current tracking methods.

Gotye scored the year’s top-selling song with “Somebody That I Used To Know” featuring Kimbra. The song was downloaded a record 6.8 million times. Carly Rae Jepsen’s “Call Me Maybe” was next at 6.5 million. Both songs are the first to cross the 6 million digital sales mark, while fun came close with 5.9 million downloads of “We Are Young” featuring Janelle Monae.

Forty-one songs crossed the 2 million download mark, helping drive digital and overall sales to a new high even as album sales began to drop again after a momentary gain.

Overall, however, album sales declined 4.4 percent. That continues a downward trend since 2004 that was only briefly halted by last year’s 3 percent gain — mostly due to the surprise success of “21.” Only two genres showed album sales gains in 2012. Rock gained by 2 percent and country, fueled by the format’s assault on the top 10, jumped 4.2 percent.

One Direction nearly matched Swift’s sales total, but did it by placing two 2012 releases in the top 10 — “Up All Night” placed No. 3 with 1.6 million sold and “Take Me Home” was fifth with 1.3 million.

Katy Perry received the most radio airplay for the second year in a row with 1.4 million spins, while Swift was the most streamed artist at 216 million streams.