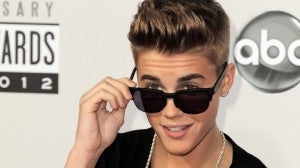 In this Nov. 18, 2012 file photo, Justin Bieber arrives at the 40th Anniversary American Music Awards in Los Angeles. Police say a paparazzo was hit by a car and killed after taking photos of Justin Bieber’s white Ferrari on a Los Angeles street Tuesday evening Jan. 1, 2013. Los Angeles police Officer James Stoughton says the photographer, who was not identified, died at a hospital shortly after the crash Tuesday evening. Stoughton says Bieber was not in the Ferrari at the time. Jordan Strauss/Invision/AP, File

LOS ANGELES – Justin Bieber on Wednesday said his prayers were with the family of a photographer who was struck and killed while trying to take pictures of the pop star’s Ferrari sports car along a freeway in Los Angeles.

Bieber was not in the car at the time. The name of the 29-year-old photographer, who was pronounced dead at a hospital shortly after the accident Tuesday afternoon, was not released.

“Hopefully this tragedy will finally inspire meaningful legislation and whatever other necessary steps to protect the lives and safety of celebrities, police officers, innocent public bystanders, and the photographers themselves,” Bieber said in a statement released by Island Def Jam Music Group.

A friend of Bieber’s was behind the wheel of the Ferrari on Tuesday when a California Highway Patrol officer pulled it over for speeding, authorities said.

The photographer stood on a freeway railing to shoot photographs of the traffic stop, and he was struck when he ran across the street to his own car, authorities said.

The driver of the car that hit the photographer, a 69-year-old Los Angeles woman, was not believed to be at fault for the accident and was unlikely to be cited, police said.

A 2010 California law toughened punishment for those who drive dangerously in pursuit of photos for commercial gain. The law was prompted by the experiences of Jennifer Aniston, who told a lawmaker about being unable to drive away after she was surrounded by paparazzi on the Pacific Coast Highway.