‘Hobbit’ fights off rivals atop New Year US box office 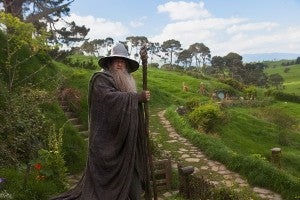 This film image released by Warner Bros., shows Ian McKellen as Gandalf in a scene from the fantasy adventure “The Hobbit: An Unexpected Journey.”AP/Warner Bros., James Fisher, File

LOS ANGELES – “The Hobbit: An Unexpected Journey” fought off all comers at the North American box office over the New Year holidays, beating two Oscar-tipped movies to the top spot, figures showed Wednesday.

The long-awaited first part of Peter Jackson’s “Lord of the Rings” prequel trilogy earned $31.9 million in its third week in theaters, according to box office tracker Exhibitor Relations.
That was just enough to keep it ahead of Quentin Tarantino’s brutal western “Django Unchained,” which made $30.1 million in its debut weekend in second place, ahead of musical adaptation “Les Miserables” at $27.3 million.

Both films are in the running in this year’s Hollywood awards season, which climaxes with the Oscars on February 24. Tarantino’s film already has five Golden Globe nominations, against four for “Les Miz.”

All-important Oscars nominations are due to be announced next Thursday, January 10.

In fourth place was another debut offering, “Parental Guidance,” a comedy starring Billy Crystal and Bette Midler looking after their grandchildren, which earned $14.6 million.

“The Guilt Trip,” about a mother-son road trip starring Barbra Streisand and Seth Rogan, earned $6.5 million for eighth place, just ahead of the 3D version of the 2001 animated hit “Monsters, Inc,” which took in $6.4 million.

Rounding out the top 10 was Dreamworks’s “Rise of the Guardians,” featuring Jack Frost, the Tooth Fairy, the Sandman and a tattooed Russian Santa Claus, which earned $4.9 million on its sixth weekend in theaters.