Ryan Seacrest: 'Rockin' in another year on ABC | Inquirer Entertainment

Ryan Seacrest: ‘Rockin’ in another year on ABC 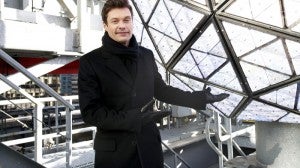 NEW YORK—Yes, Ryan Seacrest has a New Year’s resolution for 2013: improve his skill at dancing.

“There’s a Significant Other in my life who’s very good at it,” he notes. That would be professional dancer Julianne Hough, a two-time champ on “Dancing with the Stars” in whose proximity “I feel the pressure to be as good as she is. It sounds like a joke, but this is a serious thing for me to accomplish next year.”

So add dancing lessons to the long list of projects that keep Seacrest famously fast on his feet. His numerous broadcast gigs include roles on E! Entertainment and NBC, a syndicated morning radio show for Clear Channel, as well as “American Idol,” whose new season starts next month on Fox. Behind the cameras, he has a swiftly expanding production empire that includes the Kardashian portfolio of reality shows.

But as Monday nears, Seacrest is focused on this annual rite: “Dick Clark’s New Year’s Rockin’ Eve with Ryan Seacrest,” which, with related programming, will blanket ABC from 8 p.m. until past 2 a.m. EST.

Booking musical acts has been in the works for months, Seacrest says. Performers include Carly Rae Jepsen, Neon Trees, Flo Rida and Pitbull, as well as Taylor Swift, in the headliner position just before midnight.

Already he has appeared on “Good Morning America,” then headed to the rooftop of One Times Square, where the huge crystal ball was poised for its flashy descent, along with half-a-dozen TV teams queued up to tape interviews with him.

An hour later, at ABC ‘s Upper West Side headquarters, Seacrest has shed his top coat and taken a break to reflect on Monday’s extravaganza. This will be his eighth New Year’s Eve turn for ABC. But it’s his first since Clark’s death last April at age 82.

Clark, of course, originated “New Year’s Rockin’ Eve” four decades ago. And it is Clark on “Rockin’ Eve” who gave Seacrest as a youngster his earliest memories of ringing in each new year.

“I’d like to say I can imagine how it’s going to feel, but I’m not quite sure,” says Seacrest. “I looked forward so much to each year that I did the show with him.”

Seacrest recalls how typically he would be posted outside overlooking Times Square, while Clark, who had suffered a stroke in 2004, made brief appearances from indoors.

“Then, right after midnight, I would run inside and stand next to him, and he always has some funny, clever thing to make fun of me about,” says Seacrest, unwittingly speaking in the present tense. “I think I will really miss that moment this year.”

Then Seacrest takes over for the countdown show at 10 p.m. EST.

“I definitely will say something about him, and it will be from the heart,” Seacrest promises. “But the night will be, as he would want, a celebration of what’s to come: Dick was always one to say, ‘The show must go on.'”

That clearly resonates for the man who claims Clark as his mentor.

Seacrest, who marked his 38th birthday on Christmas Eve, grew up in Atlanta loving music and dreaming of a career in broadcasting.

From childhood, he was a student of Dick Clark, who in the 1950s had pioneered melding music, youth and TV on a show he called “American Bandstand.”

“I loved the perception that people came together to hang out and be introduced to new music,” Seacrest says. “Dick was brilliant at making everyone feel at home and comfortable, and never getting in the way. That’s the key.”

That became the key for Seacrest, who, today, is among the most accomplished at doing what he does. But just what does he do?

“At the doctor’s office where it says ‘Occupation,’ I always have trouble knowing what to write in that box,” he says with a laugh. “I usually put ‘Host.’ I enjoy bringing pop-culture moments and events to an audience, introducing the country to a promising new act or sitting down with an artist who has had a big hit.

“I like being the host of a party. I never feel like I need to be the star of it. Just host.”

Seacrest wangled a shift on an Atlanta radio station when he was still in high school. So, from the start, he was live on the air, “and I felt comfortable when things didn’t always go as planned. I didn’t realize how valuable that would be until later, when I was standing on the ‘American Idol’ stage.”

Populated with jittery contestants and volatile judges, “Idol” counts on Seacrest to keep everything on track.

And he does — even when a problem pops up of his own making.

“I remember a results show when we were down to the final two contestants,” he says, “and I realized I didn’t have the results card with me. I’d gone offstage during a commercial and set it down. So while I’m standing there with those two contestants, I thought to myself, ‘How am I gonna leave this shot, get that card and get back, without everybody seeing it?’

“In a split second, I decided the only way was to ask Randy (Jackson) at the judges’ panel a question, knowing they would cut to a shot of him — I figured he would give a longer answer than Simon (Cowell) — and I’d have time to jump to the side, grab the card and sprint back.”

It worked. No viewer was the wiser.

“Idol” returns January 16, and earlier this month Seacrest was busy as the show completed shooting contestants in Los Angeles, with winners of that round set to move on to the live competition.

At the same time, he tends a growing crop of productions and other business ventures, with some 50 people in his employ.

“I put as many hours into that as I do in all the shows that I’m hosting,” he says. “Production is hard work, but fulfilling. That entrepreneurial spirit is a great lesson I learned from Dick,” whose dick clark productions established him not just as an entertainment personality, but as a media mogul. “If he wasn’t on the air, Dick was in his office working hard.”

But does Seacrest ever feel like he’s taking on too much?

“Only some mornings,” he replies, with a look of mock-weariness. “But then I’ll be somewhere watching something and thinking, ‘Gosh, I want to be part of that. I feel like I’m missing that party.’ I wouldn’t want to be home watching New Year’s Eve! I want to be bringing it to YOU!”