How Menggie Cobarrubias found his calling 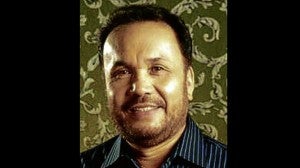 COBARRUBIAS. Won an Urian for his performance in Brocka’s “Jaguar.”

It was in the summer of 1974, after I was detained in Bicutan, that I directed Ricaredo Demetillo’s Palanca Award-winning play, “The Heart of Emptiness Is Black,” which depicted a Filipino version of the love triangle in “Camelot,” set in Antique.

The play had Sumakwel (Arthur) not paying attention to his beautiful, young wife, Kapinangan (Guinevere), who thus ended up having an affair with his nephew, Gurong-gurong (Lancelot).

I first cast Winnie Collas Monsod as the wife. I had to find men who looked mature enough for the Economics professor, so I cast Teddy Henares as Sumakwel. Then, in an audition, I discovered basso profundo Menggie Cobarrubias, an APO member whose voice suited the throaty Winnie, who used to chain-smoke then.

During a rehearsal, I saw a good-looking fellow pass by, so I asked someone to ask him if he’d be interested to alternate with Menggie in the pivotal role of Gurong-gurong. The young guy, who turned out to be Cris Michelena, said he was—and he was ready to work hard!

A year later, I directed the play, “Sakada,” followed by its screen version topbilled by Robert Arevalo where Menggie and Cris were introduced to mainstream audiences. Like Cris Vertido, who played a priest, they were both excellent in it.

Menggie’s real name is Domingo. His first screen name was Dom Cobarrubias, since we were afraid that nobody would take “Menggie” seriously—although Bembol Roco metamorphosed into a respected actor despite not using “Rafael Roco Jr.,” his real name.

Menggie was later cast in “Huwad na Bayani,” Robert Arevalo’s directorial debut. But, like “Sakada,” it went through censorship problems—so, he became tagged as an actor of “controversial” movies.

Fortunately, I had director friends who bravely cast him in their movies—like Lino Brocka and Ishmael Bernal. Thereafter, he won an Urian Best Supporting Actor award for 1979’s “Jaguar.”

Menggie continued to work as a salesman, but after he remarried, he decided to concentrate on acting. Because he is articulate and has a sense of humor, he became a popular emcee and started accepting TV and film projects. He has indeed found his calling!

Today, the seasoned actor is still seen in teleseryes. He has become a good friend of mine, like his first wife, Marilen Martinez, who has become a radio evangelist. Seeing him in a Tony Mabesa play reminds me of how things were 35 years ago when he was just starting out, when he accompanied his frat brother, Chato Mariñas, to audition for a role in “The Heart of Emptiness is Black”—the play that started it all for him!