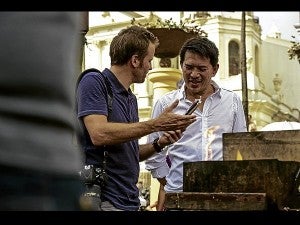 “What I’ve learned is, regardless of where you go, the people you meet are proud of where they come from,” enthused photographer and travel show host Scott Woodward.

“Around the World with Voyager” is a five-part History Channel series about Asian countries visited by Woodward via his yacht, the John Walker and Sons Voyager. The Singapore-based Canadian photographer became acquainted with the eclectic cultures of Taiwan, Hong Kong, the Philippines, India and Vietnam for the series.

“Generally, when I make a portrait of anybody, I want to capture a bit of their personality in a still photograph,” Woodward said in an exclusive phone interview with the Inquirer. “That’s what really drives me.”

The host took pictures of every chosen country’s select landmarks and icons. For the Philippine leg of the tour, Woodward was accompanied in certain locations by renowned filmmaker Brillante Ma. Mendoza, who was chosen to represent the country as its featured icon. Mendoza will appear in the third episode.

“Brillante Mendoza was chosen for being a compelling figure in the Philippines, for being a magnetic person whom people would find interesting,” said Woodward. “My experience with 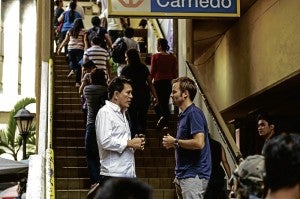 him in Manila was wonderful—he was extremely interesting, very articulate and noticeably passionate about his craft and also about the Philippines. He is a very proud Filipino. I felt we connected creatively and I think we share a lot in common, philosophically, about the creative process!”

Woodward explored and took pictures of Quiapo, Intramuros, the University of Santo Tomas and Manila Bay.

“We can look at the show as one-part travelogue and one-part biography. So the travelogue part, that was just me exploring the city and going to these places. As for the biography aspect, it was Brillante with me, telling me about the places.”

The photographer, whose pictures have appeared in National Geographic Magazine, Vogue and The New York Times, immediately noticed visual traits that are different from the country’s Asian neighbors.

“Compared to Taiwan, there’s a lot more energy and chaos in the streets of Manila. So that stood out for me, absolutely. When you compare it to Hong Kong, there’s a lot more traffic happening here. The sunsets in Manila were fantastic. In Manila Bay, the colors you get in the sky at sunset are beautiful and remarkable; I enjoyed that.”

Aside from the photography element, the show is unique for being deeply immersive, according to the TV host. “It’s not just me touring these cities as a tourist but it’s me seeing things through the eyes of somebody who has made that [particular city] his home… I don’t know of other travel shows which present the side of the presenter or host exploring these places and shooting photographs of people there.”

Woodward is thankful for his incredible “voyage” across Manila, which yielded many picture-worthy moments and memories.

“The common thread that I learned amongst all these people is pride in their home country and a desire to share that with the world,” he said. “It’s different from just arriving in and exploring Manila, and going to the usual tourist destinations. I got a little bit of insight into a part of the Philippines that not everybody gets to have, and to really use that icon as a conduit to get deeper!”