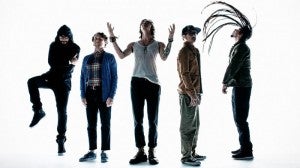 MANILA, Philippines—Incubus is an American rock band whose demonic name prompted religious groups to circulate text messages to discourage people from watching its concert in Manila.

Nevertheless, the show on Thursday night at the Smart Araneta Coliseum attracted a full-house crowd of more than 10,000— many of whom believed that the band’s music was anything but evil.

“Their songs make me happy, I don’t see anything bad about that,” a young female fan told the Inquirer during the concert.

Earlier, she and a female friend were seen imitating Incubus front man Brandon Boyd’s stage moves which, in a few instances, curiously resembled that of a shaman performing a ritual.

In a story published by rollingstone.com two weeks before the show, Incubus guitarist Mike Einziger commented on the band’s detractors:

“I feel sorry for them. I’m just glad I’m not them because, if they actually took a second to listen to any of our music or speak to any of us, they could see that we’re actually promoters of peace and we’re huge environmental activists, advocates of social justice.”

What was clear during the concert was that some of Incubus’ songs didn’t mince words. Opening with “Megalomaniac,” the band pulled out the stops, slicing the atmosphere with sharp metal music as Boyd led the vocal attack targeting egocentric leaders: “Hey megalomaniac/You’re no Jesus/Yeah, you’re no f—ing Elvis/Wash your hands clean of yourself, maniac, and/Step down…”

But the anger in those lyrics rose above the guttural sense, and that’s what made Incubus a very popular band especially with women.

Known at the start of its career in the late 1990s as a nu-metal group, Incubus stood out because it didn’t espouse ear-splitting noise—Exploring instead the aural textures that resulted from its mix of hip hop, funk and thrash.

At the show, the eerie, hypnotic interplay between Einziger and turntablist/keyboardist Chris Kilmore was a joy to hear. It served as a highlight in a song called “The Warmth.”

Female fans singing, no, shouting out the lyrics of most songs played that night was a predominant sight. In one instance, the concert promoter’s wife herself screamed in sync with Boyd’s emotional pleading:

“So pardon me while I burst into flames/I’ve had enough of the world/And its people’s mindless games …” Her expression, though, was devoid of any desperation—but more of contentment resulting from catharsis.

Slowing down after a frenetic pace, the band drew louder cheers as the charismatic Boyd sang about failed romance and taking second chances:

By now the women in the audience were totally enamored, never mind if Boyd was wearing rags—his t-shirt sleeves cut off so wide it made him look like a street bum. The other band members were dressed like ordinary folk, as well.

Apparently, Incubus wanted its fans to focus on its music, even as Boyd couldn’t help being a girl-magnet. The only thing that should worry zealots is how fans worship Boyd like a god.