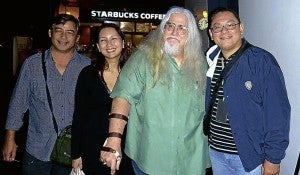 After a recent private screening of “Oro, Plata, Mata,” director Peque Gallaga approached Manet Dayrit, head of Central Digital Lab—the company that digitally restored the 1982 film—and told him he wanted to correct the sound and dialogue in a scene.

Gallaga had actively participated in the restoration process. He told the Inquirer how elated he had been that a team of professionals had spent a lot of time (at least 1,500 hours) and effort restoring the landmark film to its full glory. The project was spearheaded by ABS-CBN Film Archives.

More than an award

“For me, this is more precious than an award. It says that people cared enough about the film to preserve it,” Gallaga said.

The film’s cinematographer, Rody Lacap, was also involved. “He checked the color grading,” said Gallaga. “When we shot the movie, we were going for a certain glow, a golden patina.”

Gallaga also made sure the sound quality would be as he originally intended it. “In the 1980s, movie houses didn’t have high-tech sound system. [Even] subtle background music was 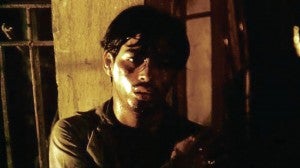 Joel Torre was a production assistant before landing the lead role in “Oro, Plata, Mata,” his acting debut.

He recalled that in those days before digital technology, editing was done manually. “With this restoration, even dust, fingerprint and scotch tape marks were removed from the film.” The new “Oro” was unveiled to the public on Nov. 28, opening the Cinema One Originals fest.

An earlier restoration project, Ishmael Bernal’s “Himala,” started a theatrical run on Dec. 5. Leo Katigbak, head of the ABS-CBN archives, told the Inquirer about similar plans for “Oro,” including a screening in Bacolod, the film’s setting.

There is also the possibility of releasing a special criterion edition of “Oro” on video—with special features like the director’s commentary and recollections from the cast and crew. 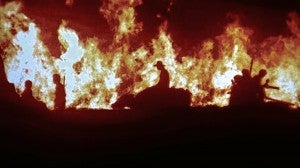 Famous burning hacienda scene: All the actors were present, except for Asensio who had to fly back to Manila.

Gallaga remembered tapping campus theater groups: “Maids and houseboys in the film were played by student-actors from La Salle, St. Scholastica’s and La Consolacion in Bacolod.”

Scriptwriter Jose Javier Reyes ended up doing a cameo as a Chinese cook in the opening party scene. “I was hanging out on the set all the time,” Reyes said, and added that Joel Torre was “discovered” via the movie. “Albert Martinez was supposed to play the lead, but he was tied up with ‘Bata pa si Sabel.’ Joel, a production assistant at the time, got the part. It changed his life.”

The movie captures Torre, Sandy Andolong and Cherie Gil at their prime. After watching a preview of the restored “Oro,” Torre noted, “We had great skin…we didn’t need HD makeup.” Seriously, he said, he was reminded of coworkers who had since passed on—actors Mary Walter, Manny Ojeda, Abbo de la Cruz and production designer Don Escudero.”

For actress Fides Cuyugan-Asensio, watching “Oro” again was a “sentimental revisit, especially now that I am doing one indie film after the other.” (The movie was produced by the Experimental Cinema of the Philippines.)

The restoration of “Oro” and “Himala” marks an important first step in the long journey ahead, said Gallaga. “There are 3,000 titles in the network’s library. Even if they restore one film 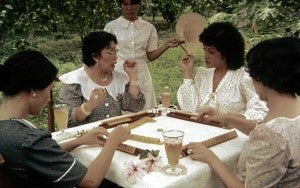 a day, it will take them over 10 years to finish everything.”

There was a missing scene from the print used to restore the film, the result of celluloid unspooling from the projector. “It shows Sandy and Joel in a field of ferns during a storm,” Gallaga said. “I wanted to do a Celso Ad. Castillo with that scene.”