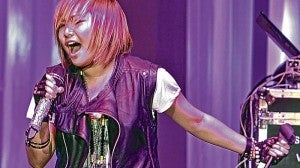 Early this year, singer-actress Charice shed her sweet, wholesome image and emerged with an edgier look. Her hair was dyed blonde and cut short to resemble Japanese anime characters. She had a tattoo inked on her left forearm, and her personal style screamed rock and roll.

The 20-year-old international artist’s unexpected transformation shocked not a few. And before long, Charice became a subject of ridicule and mockery, especially on the social networking site Twitter.

She has since been wary of facing the media. While her friends and family know she’s a strong person, Charice said that “she’s only human and gets hurt, too.”

In an interview with Sunday talk show “The Buzz” on Dec. 2, she said in Filipino: “I’d rather not hear the media’s questions and criticisms. They call me suplada (a snob) because I don’t grant interviews. But you know, some of them can be disrespectful,” she said. “I felt bad at that time. I was hurting.”

But what really gets to Charice is being judged by people who barely even know her.

“It was very painful. Even people I know judged me. I wanted to tell them that my new hair and tattoo don’t define me. I’m still the same person,” she said.

As for her new tough-girl image, Charice said she understood how people reacted to it. However, she stressed that she didn’t feel the need to explain or justify her decision.

In June, Charice served as one of the three judge-mentors on the talent search “X Factor Philippines.” Though she already expected to be ruthlessly bashed, she admitted that it was so-mething that she couldn’t ever get used to.

“I couldn’t enjoy interacting with my fans on Twitter because I also get to read hurtful remarks …  I pushed through with the judging stint because I wanted to see new talents,” she said.

Aside from her looks, the petite powerhouse singer also drew flak for speaking with a contrived American accent.

Some people took it as being maarte (finicky),” she pointed out. “I know my English isn’t perfect, but I’m trying my best. I do it because of my job; it will earn me extra points.”

“I hope people don’t take it the wrong way,” she added.

Asked about her rumored rift with mother Raquel Pempengco, Charice said that things were okay between them. The issue surfaced when she started becoming more independent, Charice said. “Having small arguments is normal in any family.”

Meanwhile, Charice was tight-lipped when asked to explain why she fired her longtime manager Grace Mendoza. She then appointed Canadian Courtney Blooding as her personal assistant, but they reportedly parted ways after a few months.

Charice was equally guarded when it came to her love life. Blushing furiously, she said: “I’m so happy.”

Despite the intrigues, Charice continues to do well in the international scene. Her performance in the Hollywood comedy movie “Here Comes the Boom,” which stars Kevin James and Salma Hayek, earned Charice rave reviews from critics abroad. The movie is set to hit local theaters in January 2013.

“I owe (you) Filipinos big time for your support,” she said. “Although you don’t feel my gratitude at times, in my heart, I owe you guys.”