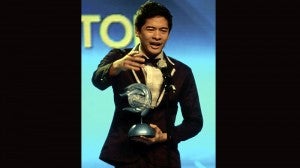 Mara Lopez had to seek the permission of her Japanese father before agreeing to play her first sexy role in “Palitan,” which won for her the best actress trophy at the 2012 Cinema One Originals Digital Film Festival awards show on Monday night.

“I understood my father’s apprehension. The role required me to do torrid kissing and even some pumping scenes. As a dad, he just didn’t want his daughter to be too exposed,” Lopez told the Inquirer shortly after the awards ceremony held at the Dolphy Theater, ABS-CBN compound in Quezon City.

“Mom didn’t need too much convincing,” Lopez added. “With the award, I was able to prove to my parents and to people that I can be an actor that working on the film was all worth it.” 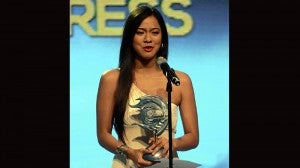 “It was tough working on this film. I felt pressured most of the time because I had to measure up to (lead actor) Mon Confiado’s energy and focus. The character demanded so much from me.”

Medina added: “My father always tells me, we’re only as good as our last movie. I just trusted my director. I gave him what he demanded. I’m glad the jury saw that I did my job well.”

The best picture award went to Pam Mira’s “Pascalina,” about a simple girl who, after visiting her dying aunt, experiences changes in her life that will push her to the edge of madness and monstrosity.

“I didn’t expect to win,” said Miras during her acceptance speech. “I had hoped for my staff to win because they played a big part in creating this movie, (which is) also my first full-length feature. I’m thankful to Cinema One for allowing me to shoot the film in the manner that I like—it’s a first time that a movie that originated from an SD camera was screened in DCP (digital cinema package).”

However, it was “Catnip” director Kevin Dayrit, who copped the most number of awards. He won best director, best screenplay, best editing, and best musical score, which he shared with the members of the bands Join the Club, Circa and Rugis. 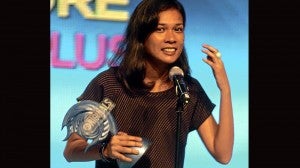 Cinema One, a cable television network and the organizer of this annual film festival, also handed filmmaker Peque Gallaga his lifetime achievement award. His friend and colleague Lore Reyes presented the trophy.

“It’s a real honor to walk in the giant steps of Nora Aunor and the late Mario O’Hara (who were last year’s recipients of the same award),” said Gallaga in his acceptance speech. “I am sharing this with Lore who directed some 25 films with me.”

Gallaga added: “This belongs to the people who won tonight… However, losing doesn’t mean God doesn’t love you or that you are lousy. Winning only means you are able to project your vision in an excellent way.” 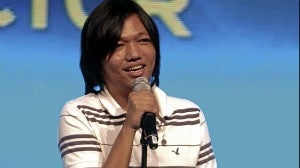 KEVIN Dayrit won the most number of awards for “Catnip,” including best director.

“The people who win are those who are able to capture the Zeitgeist, or the spirit of the time. Perseverance and persistence are the secrets to coming up with excellent creative work,” Gallaga advised young filmmakers who attended the event.

The Cinema One fest runs until December 9 at the Robinsons Movieworld Galleria in Mandaluyong City.