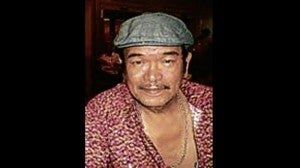 CASTILLO. In his films, bed and altar sometimes became one!

Before his death earlier this week, director Celso Ad. Castillo had been generally inactive for years, except for occasional outings as a character actor in indie productions. And yet, his demise was mourned by many in the Filipino movie industry as the loss of a major talent, unique in his career-long cinematic celebration of history, patriotism, religion and sex—what an idiosyncratic combination!
We were lucky to have been there at the start of Celso’s rambunctious movie career. Why, he even showed us the rushes  of an early sex drama that he directed, and we were astounded to hear his voice in the raw footage, instructing his nubile young star on how to sensuously take off her clothes, seductively stretch and roll on a bed this way and that, and “sexily” moan and groan like she was having a bad dream—or a very upset stomach!

Celso Ad. Castillo was sui generis here in his similarly sensual interest in religion, and his early movies were remarkable in their unexpected fusion of those two extremes in terms of heightened human experience. Eros and agapé were symbiotic twins in his movies’ unctuous universe, where bed and altar sometimes became one!

In this regard, we saw early on that he was our version of Luis Buñuel, and extolled his films as messy but ardent little gems. Celso was frankly amazed that he would be taken all that seriously—but, when he did one of his masterpieces, “Pagputi ng Uwak, Pag-itim ng Tagak,” he had gained enough appreciation for his unique gifts as a filmmaker to go for broke and reach out to achieve one of the most astounding cinematic utterances of his entire career.

When we mentor students, Celso’s “Pagputi” is one of the forgotten marvels that we urge them to find and discover, because its combination of folk, religious, activist, artistic and sensual themes is truly choice.

Only Celso could have come up with such a panoramic cinematic mural of the Filipino id, essence and identity, and we urge a local movie channel to air “Pagputi ng Uwak” (starring Vilma Santos and Bembol Roco) as its tribute to the recently departed filmmaker.

True, Celso could be really messy in his work, and there were even some fallow, shallow years when he took the easiest way out and did virtual copies of some of his own past productions.

All told, however, Celso Ad. Castillo’s career-long output was acutely individualistic and passionate, sometimes shamelessly imitated by his inferiors—but never equaled, even if it was he himself who was lazily doing the imitating!