Anita Linda is on a US break, very much alive | Inquirer Entertainment
Close
menu
search

Anita Linda is on a US break, very much alive 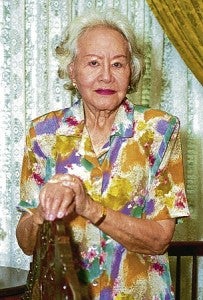 Contrary to an Internet report, Anita Linda is alive and vacationing in the United States.

Family and friends were confounded by the online news on Tuesday. The veteran actress is said to have died in August, but she actually shot a movie in October.

The report dated August 27 was written by one Deborah Smith Ford on the website examiner.com.

Director Adolfo Alix Jr. shot Linda’s scenes in the Cinema One drama “Mater Dolorosa” after the supposed time of death. Alix said the report was upsetting.

The actress’ daughter Francesca Lake-Legaspi complained to the Inquirer about the “malicious” story.

According to its site, examiner.com is an “entertainment, news and lifestyle network that serves… millions of monthly readers across the United States and the world.”

Legaspi and Alix said Linda celebrated her 88th birthday on November 23 in Los Angeles, California, where she will spend the holidays with eldest son Fred Cortez Jr.

Before leaving on Nov. 20, the actress talked to the Inquirer about that vacation and her coming films with Alix—“Mater Dolorosa” and “Ride to Love.” Bayani San Diego Jr.