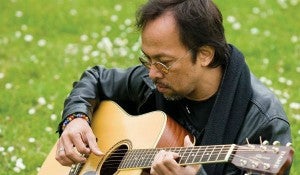 “Panaginip” is the follow-up to Cabangon’s previous album and first under Universal Records “Byahe”, which stayed as the number one album in major record stores for 17 weeks. “Panaginip” mostly features revivals, consisting of four covers and a showcase of 11 original compositions of Cabangon.

Similarly, Cabangon’s earlier album “Byahe” spawned numerous awards, including the elusive Double Platinum Record Award and a sweep in the 2010 Awit Awards. The same record topped the music charts for 20 weeks, while his most recent album, “Tuloy ang Byahe” earned him another Gold Record Award two months after its release.

“Tuloy ang Byahe” will have not just one but two repeat performances due to the overwhelming clamor of fans who still wish to see the show. The concert now billed “Tuloy ang Byahe, (The Repeat) Ngayong Pasko” will be staged for two consecutive nights at The PETA Theater Center, New Manila Quezon City on December 13 and 14 at 8 p.m.

The repertoire will include several songs from Noel’s “Byahe” albums and a look back on Noel’s musical journey from a humble folk singer to one of the top-selling recording artists today. It will feature many of his own compositions, which mirror his own journey from a self-confessed tambay (“Dito sa Kanto”) to an artist for social change (“Ako’y Isang Mabuting Pilipino”).

Noel will also sing a number of Christmas songs in time for the holidays.

Noel’s special guests include some of the biggest names in the music industry, namely: Ely Buendia, Aiza Seguerra, Gloc-9 for Dec 13; Ogie Alcasid, Jim Paredes, Boboy Garrovillo and Gloc-9 for the Dec 14 show.

“Tuloy ang Byahe, (The Repeat) Ngayong Pasko” is another project to support PETA’s Endowment Fund campaign, [email protected]: Take PETA Beyond 50, which is meant to ensure the sustainability of PETA’s cultural work and unique creative programs. The campaign aims to raise P50 million in time for the theater group’s 50th anniversary in 2017.