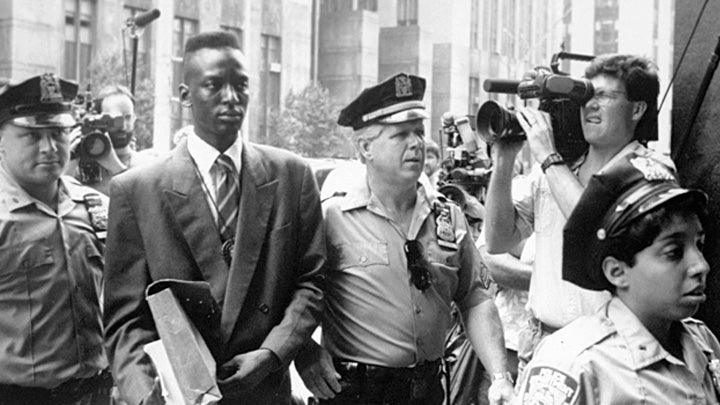 This film image released by Sundance Selects shows accused rapist Yusef Salaam being escorted by police in New York in 1990. Salaam is the subject of the documentary, “The Central Park Five,” about the 1989 case of five black and Latino teenagers who were convicted of raping a white woman in Central Park. AP/Sundance Selects, NY Daily News

“The Central Park Five” takes an emotionally charged subject — the wrongful conviction and imprisonment of five black and Hispanic teenage boys for the rape of a white female jogger — and makes its case in a straightforward, detached manner.

It is thoughtful, educational, understated perhaps to a fault — tonally, the trademark work of veteran documentarian Ken Burns, who directs, writes and produces this time with daughter Sarah Burns, who wrote a book about the crime, and her husband, David McMahon. It efficiently depicts, but doesn’t get caught up in, the hysteria of the place and time: a racially and socioeconomically divided New York City in April 1989, when it was rotting with crack cocaine, AIDS and violent crime but also gleaming with the conspicuous consumption of the era.

As veteran New York Times reporter Jim Dwyer puts it: “It’s as if there was a social moat that divided these two New Yorks.”

The late-night attack on jogger Trisha Meili — then a 28-year-old Wall Street investment banker who’s now an author and motivational speaker — became a symbol of this chasm and everything that seemed wrong with society. And the five young men from Harlem who happened to be running around Central Park with a couple dozen troublemakers that night — Antron McCray, Kevin Richardson, Raymond Santana, Korey Wise and Yusef Salaam — became all-too easy scapegoats.

“The Central Park Five” aims to clear their names publicly, once and for all, in a way that much of the press did not when a judge vacated the young men’s convictions in 2002. It also quietly, insistently argues that this was more than just an example of detectives trying to make a name for themselves by quickly wrapping up a high-profile case — the one that introduced the word “wilding” into the vernacular — but rather a major symptom of institutional racism within the department.

For the sake of perspective, it would have been helpful to hear from at least one of the people who investigated or prosecuted the case, or from the tabloids that were so quick to condemn these kids, or even from the victim herself. All declined to participate.

But we do hear extensively from the five who were accused as they describe the fear of that time and the struggle to regain all they lost during the years they were behind bars. In archival photographs and footage, we see their sad, scared little faces and hear them admit to acts they didn’t commit; as they calmly and methodically explain in present-day interviews, they felt coerced to say whatever was necessary to go home.

Contradictory confessions and timeline disparities didn’t matter; neither did the fact that none of their DNA was found at the scene. The kids didn’t even know where in Central Park the attack took place. Meanwhile, there was a mysterious “sixth perpetrator”: serial rapist Matias Reyes, whose intimately detailed confession 13 years after the attack (not to mention a DNA match) set these innocent men free.

So how does this sort of thing happen? Even as “The Central Park Five” seeks satisfactory answers, it stirs outrage and discouragement all over again.

“The Central Park Five,” a Sundance Selects release, is not rated but contains language and graphic, violent details. Running time: 119 minutes. Three stars out of four.