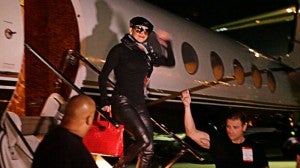 J.LO ARRIVES IN MANILA Jennifer Lopez, more popularly known as J.Lo, arrives at the Ninoy Aquino International Airport Sunday evening for her Monday performance as part of her “Dance Again” world tour.  J.Lo’s  Manila’s concert was made possible by Vista Land, the country’s biggest home builder and the major sponsor of the event. PHOTO/ JASPER LUCENA

Security was tight, with most members of Philippine media disallowed from covering Lopez’s arrival at the Ninoy Aquino International Airport.

After her Nov. 24 show at the Mercedes Benz Arena in Shanghai, Lopez’s Manila concert is the 42nd stop of a 55-city world tour, “Dance Again,” to promote her 2012 compilation album, “Dance Again…the Hits.”

The tour also marks the first time that Lopez is on the road as a solo artist; her two previous tours featured her performing back-to-back – with ex-husband Marc Anthony in 2007, and with Enrique Iglesias this year.

The most pricey tickets to Monday night’s show at the MOA Arena (almost P26,000 per VIP seat) have been sold by the block to major sponsors Vista Land, Zenea and PLDT Fibr.

The patron (reserved seat and standing), lower box and upper box section seats are likewise priced much more expensive than previous concerts that featured major acts. General admission at more than P2,500 per ticket is still quite steep for the average-income fan.

However, if the MOA Arena – which accommodates 10,000 people for concerts – is filled to capacity Monday night, it only means that Lopez’s diehard fans saved enough money to watch her perform live.