Monique on coming out: No big deal 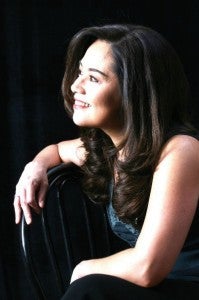 THE SINGER-actress will speak at the Gay Pride March on December 8 in Makati to “give inspiration” to the LGBT community. GIBBSCADIZ.BLOGSPOT.COM

What a joy it was to catch up with my “V Sister,” Monique Wilson, at the press conference of her crusade, “One Billion Rising”—a global strike to end all violence against women set on Feb. 14, 2013 (www.onebillionrising.org).

I’ve seen how hard Monique works since I was part of her project “Vagina Monologues” twice. She has such a commanding presence, yet she has this certain kind of warmth that makes you feel instantly at home.

I admire Monique all the more after she bravely admitted at a recent press con that she’s a gay woman. By being true to herself and being comfy in her own skin, Monique deserves a standing ovation even off stage.

Here are excerpts from my interview with Monique.

Do you and Lea Salonga have an unspoken professional rivalry?

Lea and I have been close friends since we were kids. I did my first play when I was 9 with Repertory Philippines, “Annie,” with Lea.

We’ve never had professional rivalry. When you grow up in theater, you develop a level of security so we were both very secure with ourselves. In theater, we view one person’s success as our success because we are very much a team.

Work really hard because it’s a very demanding show vocally, emotionally, physically. Pinoys have raw talent but that alone cannot sustain you if you are sick or tired. You should also have skills, which you acquire by taking singing and dance lessons and attending acting workshops. Stay fit. Stay humble because if you do “Miss Saigon,” you are part of a bigger picture. It’s not just about you. And remember, even if it’s a love story, it’s also about war. Look deeper into the context why a young girl became a prostitute. Not because she wanted to, but because she had to.

For me it was just fun. Lea and I said, if we get it then we get it. But if we don’t, then we won’t really know what we’re missing out on. So we just made sure to have an enjoyable audition. They were very nice to me and told me it was up to me how to act it out. Lea and I had no expectations. When they sent us to London for final auditions, that was a thrill. We said if we get chosen that would be a bonus. Then it dawned on us that it was really a big task, but we felt we were ripe for it since we’ve been in Repertory for so long.

You’ve finally come out of the closet! How does it feel after all these years?

I’ve always been comfortable with my sexuality. In theater it’s not a big deal. I’ve always had supportive family and friends.

For many, many years, I mean I didn’t consciously blurt it out in press conferences. I wasn’t afraid or ashamed. I was just thinking that I really wanted to promote my show. If you look back at New Voice Company, I have produced so many shows on homosexuality because it was something very close to my heart. I just didn’t feel the need to shout it out because it might distract from my work.

I’ve always respected the media here because they’ve always respected me, too. Nobody pried or pushed. Some may have asked and I never denied it. My sexuality never stopped me from doing what I wanted to do, so in that way I am very blessed. I’m thankful people gave me that space to do my work and succeed.

Two years ago, I was diagnosed with blood cancer but I’m okay now. That time I felt time was too short, so what was I waiting for. In my advocacy, I keep saying, “Break the silence” ’cause silence is what prevents violence. So here I am, proudly declaring I’m gay. I’ll be speaking at Gay Pride [an annual event of the lesbian, gay, bisexual, and transgender, or LGBT, community to be held in Makati City] on December 8. I want to give inspiration and strength to the LGBT community and our young gay people not to be afraid to embrace their life.

How did Lea and your family react when you told them about your sexuality?

Lea has always known about it since our “Miss Saigon” years. Aside from their (Lea and her family’s) total acceptance, they became protective of me which was rooted in the fact that they were feeling out if people would be mean to me or hurt me.

What’s it been like to be with your partner of 14 years?

It’s been great, solid. I think any relationship must be based on mutual respect and shared values. That’s what matters in the end.

What’s your take on gay marriage?

I believe in it! Any long relationship is akin to marriage already. A lot of work has to be done for gay rights here in the Philippines but in London where I’m based, it works because they don’t discriminate.

Are you and your partner going to take the plunge?

Possibly yeah. Why not?

Tell us more about “One Billion Rising.”

It will be on Valentine’s Day 2013. It’s a global call to action where a billion people around the world, and we hope millions here in the Philippines, will gather to not just dance and have a street party, but really to demand an end to violence against women and girls.

We’re using art and dance and advocacy to spread that message. Also, the writer of “Vagina Monologues,” Eve Ensler, is arriving in December. I think for people to just hear her again … will be so amazing and so inspiring.