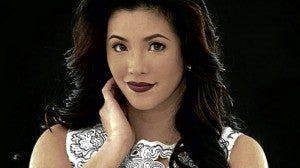 Lulu Dayao, media observer, recalls her first encounter with Regine Velasquez: “What happened during Regine Velasquez’s 25th anniversary concert brought back memories and a realization of how far she’s come as a performer.

“Sometime in 1986, a colleague and I met with Ronnie Henares. We needed help in identifying the suitable celebrity for a sexuality program for responsible adolescents. The chosen celebrity would perform with Menudo in a music video, then go on a roadshow covering several schools in Metro Manila.

“Henares intimated that one of his new talents, Regine Velasquez, was a terrific singer. For two nights, we watched Regine perform. Nobody could out-sing her—and I was hooked!

“We didn’t get to work together, but I kept track of Regine. At one point, I felt disappointed when she started developing some affectations—but, it was just a phase, and I was relieved!

“I like the fact that the once timid Bulakeña has matured. I like how she laughs out loud spontaneously, and how she speaks her mind.

“Regine is a good example of a probinsyana empowered the right way. The way she carried herself at her concert last week was clear proof: She chose not to give up even when her voice faltered! She is a whiff of fresh air at a time when we need it most!”