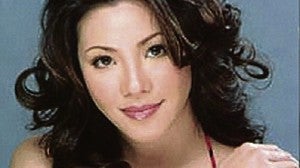 MANILA, Philippines—Regine Velasquez’s voice was not in good condition during her silver anniversary show held Friday night at the SM Mall of Asia Arena, witnesses among the audience relayed to the INQUIRER.

Velasquez reportedly cried and apologized, promising to do another show for free.  She told the audience to keep their tickets and said she hoped the management of the Arena would also give her a free accommodation too and an immediate schedule fort the planned free concert.

She said she almost canceled the show but decided to go on with it instead. The audience, who are composed of her loyal fans, didn’t boo her out but gave her honest confession a warm applause.

Velasquez at one point asked the help of stand-up gay comedian Anton Diva to sing Jeffrey Osborne and Peter Schless’s “On The Wings Of Love.”

She regained her composure and voice when she performed with Lani Misalucha.

With her son, baby Nate Alcasid, on stage, she cried some more while singing Dave Barnes’s “God Gave Me You.”

Her bucket of tears didn’t stop pouring when she sang Dan Fogelberg’s “Leader of the Band,” with her father, Mang Gerry, on stage.

Her husband, Ogie Alcasid and friends rather saved the night. Alcasid performed with Janno Gibbs. His best friend, Michael V, danced the Gangnam style, which brought the house down.

Also in the audience were Lucy Torres-Gomez and Kris Aquino.

Vice Ganda summed up what happened that night in his usual sarcastic self. He told the audience that Velasquez not only holds the record of having the highest number of standing ovations but also the highest number for a singer to hit the wrong notes.

“But still nobody walked out. Everybody clapped and cheered for her,” he said.

In an earlier interview, Velasquez said the biggest challenge for her at this point in her life—after pregnancy, childrearing chores, long absence from the concert scene—is to regain her usual singing voice.