Mel’s ‘Magpakailanman’ back with Zendee’s story 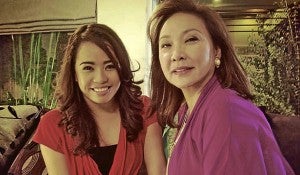 Televiewers can expect to see a different side of news anchor Mel Tiangco when she resumes hosting the weekly drama anthology “Magpakailanman,” which returns to the screen on November 17.

“For the new program, I want to make the viewers feel that I’m more reachable, more approachable,” Tiangco told the press during the recent program launch at the GMA 7 Studios in Quezon City.

“The new look has to be very warm and intimate,” she added. “We’re considering taping most of my scenes inside my own home.”

“She finally agreed when it was already our president (and COO Felipe Gozon) who sent word about the return of the show,” related Magno.

The network canceled the airing of “Magpakailanman” in 2007.

Tiangco did not know why, saying, “I would just guess that all things happen for a reason, at the right time, although I admitted that I felt hurt.”

Magno said that Tiangco wanted to add “new elements” to the show.

“Tita Mel wanted her persona reflected in the program—that she’s a news personality and a public servant,” Magno explained. “She wanted the stories to be more in-depth.”

Tiangco clarified the program would have changes, but would “not be totally different” from the format that viewers had loved. It would have the “same beautiful and aspirational stories, as well as award-winning performances from the best actors and actresses in the industry.”

The show’s top goal, Tiangco said, “is for televiewers to learn something from the stories, not to make them cry. The stories will all be based on true-to-life experiences, not just of ordinary people but known personalities as well.”

“Magpakailanman,” an original concept and creation of the GMA Entertainment TV Group, initially ran from 2002 to 2007. It has been awarded the best drama series twice at the Catholic Mass Media Awards. It also garnered the Anak TV Seal in 2008 and 2009.

“Only a few people know that the show was initially meant for just one year,” recalled Tiangco.

The network conceptualized it in time for Pope John Paul II’s visit to Manila for the 4th World Meeting of Families in 2003.

“My bosses said we needed to come up with a family-oriented show. When they first asked me to host it, I hesitated. I said, ‘I don’t know drama. It’s not my forte.’ However, I found it to be very interesting.”

Tiangco confessed to feeling emotional about the program’s return. To everyone’s surprise, the newscaster broke to tears during the press conference.

“I cried after seeing the program’s AVP (audio-visual presentation) because I realized that I really was hurt (by its cancellation),” she said. “I kept this feeling bottled up for four years. I told myself, ‘It’s just another show. I still have a lot of work to do. I still feel loved by GMA 7.’ I guess I just psyched myself up, put the feeling aside.”

Tiangco will play a big role in picking the stories for the new program. “In choosing them, we weigh the pros and cons, we see if a story is suited to the show’s format. We tell them without exaggeration. As a rule, we always respect the person and his or her story. We do not air something about someone without permission.”

She added that her production team has to get the approval of the network’s legal department first before airing each episode.

Tiangco said she dreams of one day featuring the life stories of reelected US President Barack Obama and beleaguered former President Gloria Macapagal-Arroyo in the program.

“Doing something about Obama, who was recently reelected as American president, would be really interesting,” she said. “There’s nothing wrong in dreaming big, right?”

On Arroyo, she said: “I want to share with the televiewers how she really feels, what the truth is in her eyes, and what all of these things have done to her life.”