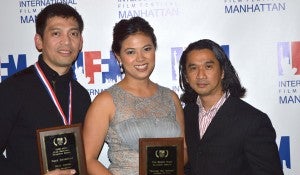 The award was handed during the opening ceremonies on November 8. The festival runs until 15 at the Quad Cinemas, 34 West 13th Street, New York.

“The Caregiver” is the story of Carlito Mariposa (Joshua Deocareza) who is nursing Agustin Vergeire (Marcus Madrigal), a “sepaktakraw” (competitive hacky sack) player who was badly injured in one of his crucial games.

Confined in a very limited and shrunken world, the two developed an unlikely attraction that had Carlito thread an unexpected journey of self-discovery, shedding layers of skin along the way like a deadly viper.

Fredo is the only Filipino winner of the Merit and Juried awards handed out that night.

Fredo, in his acceptance speech, mentioned that the award was unexpected given the quality of films in competition. He said  “The Caregiver” is a personal film and is delighted to have found a very appreciative audience in this festival.

Luis Pedron, Director of IFFMNYC, forwards that “the directorial prowess of Will Fredo and the acting skills of Filipino actors, show the relationship between a caregiver and a patient.

The narrative ends with a jaw dropping twist!”

In attendance in the opening and awards night were Liza Diño, who stood in for GregoryMacaraeg, president of HUBO Productions, to receive the Mount Hope Project Award for the film “Ganap na Babae (Garden of Eve),” and Fernell Cruz, board member.

HUBO Productions is an independent multi-media production company that is known for its core film ventures. To date, HUBO has released three-full length films.

“In Nomine Matris,” its fourth offering, is an official selection in the New Wave Cinema Category ofthe 38th Metro Manila Film Festival, which will run December 18 – 22.

HUBO has ventured its artistic reach in music, theatre, dance, and visual arts. HUBO encourages artistry through practical means and dedicates its art to stimulate the mind however unconventional and unfamiliar.