Creed, the Grammy Award winning band and the 18th best artist of the decade according to Billboard performed for the first time in Manila.

They opened the night with the song “Are You Ready” from their 1999 album “Human Clay” sending the crowd jumping and head banging to their music.

The band sang their hits mostly from “Creed Greatest Hits Album” including “Torn,” “My Own Prison,” (which is also the title of their first album released in 1997), “Bullets” but the crowd went crazy when they started singing all their hits such as “One,” “Higher,” “One Last Breath.” 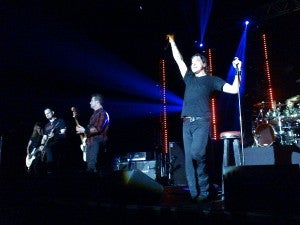 In the middle of his performance, Stapp was already limping, the lights went out but lead guitarist Mark Tremonti, rhythm guitars Eric Friedman dazzled the crowd with their command of the instrument, effortlessly playing chords, melody while Stapp went off stage.

A few minutes later, Stapp went back, limping, sat on a stool and continued singing but not for long. He stood up again as if nothing happened and rocked the crowd with their hit song “One.”

Stapp’s vocals were as powerful as ever. He can still energize a hall once he steps up on stage. I am as always amazed at his movements, which reminded me of those rappers (minus the crotch grabbing).

From the band that broke up in 2004 and reunited in 2009 and released their fourth album “Full Circle,” it is amazing to see the fans still singing to their hits, knowing the lyrics by heart.

Of course, the concert would not have been complete without Creed’s biggest hit “With Arms Wide Open” where he engaged the crowd to sing with him.

During their press conference, Stapp said he is excited to hear Filipinos sing to their songs after learning that “the Philippines is a nation with very tremendous musical talent.”

“The fans here are so refreshing. They connect with us deeper in a different level and we will bring them when we go home,” Stapp said.

Creed definitely went true to their promise of another thrilla in Manila as they delivered their unique hard rock style. With the kind of music new rock bands display, leaning towards pop, we are glad to have been reminded how heavy rock sounded.