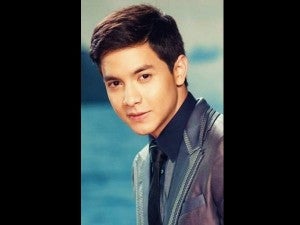 RICHARDS. His star is clearly on the rise.

Alden, who’s Richard Faulkerson Jr. in real life, has actually been feeling the glare of the spotlight since he was 16, when he began winning male pageants.

The 20-year-old looker was on his way to getting a degree in Business Administration at De La Salle Canlubang when his mother died of pneumonia. He recalls, “My mom loved watching teleseryes, and once told me, ‘I want to see you on TV someday.’ When she passed away, I began pursuing a career in acting—but, I didn’t expect I’d learn to love the craft so much. I hope she’s seeing all this, because I’m now living her dream!”

Alden is outspoken without being arrogant. He doesn’t initiate talks about the issues hounding him, but when he’s asked about them, he bravely acquiesces—like when we asked him about the most hurtful intriga said about him: “Somebody wrote that I had a gay benefactor (laughs). I wouldn’t work this hard if I wanted to get things the easy way!”

What’s one thing his fans don’t know about him? He grins, “I still use the tabo (dipper) and timba (pail) when I take a bath (laughs)—even when I shower in my bathroom. I love getting massages—they relax me. And, I listen to Josh Groban and Gregorian chants!”

What turns him on? Alden replies, “I don’t want women to do the pursuing—that’s a man’s job. I like long-haired morena beauties, and I love good conversationalists. But, bad hygiene turns me off.”

Were he and Louise delos Reyes ever an item? He confesses, “I don’t easily succumb to romantic distractions. In fact, Louise and I initially rubbed each other the wrong way. Now, we confide in each other. There was a time when I attempted to court her—but, Enzo (Pineda) was faster (laughs)!”