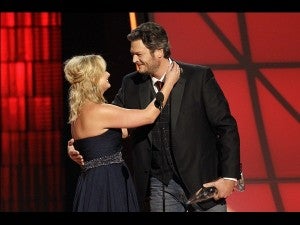 Miranda Lambert, left, and Blake Shelton embrace onstage after winning the award for song of the year for “Over You” at the 46th Annual Country Music Awards at the Bridgestone Arena on Thursday, Nov. 1, 2012, in Nashville, Tenn. (Photo by Wade Payne/Invision/AP)

WASHINGTON — Blake Shelton scored a hat trick late Thursday at the 46th annual Country Music Association awards in Nashville, Tennessee, where the victims of superstorm Sandy were not forgotten.

Shelton, 36, a three-time Grammy nominee, took the most-coveted entertainer of the year honor after collecting laurels for best male vocalist and, with wife Miranda Lambert, best song for “Over You.”

“What is this? I don’t even know,” said the clearly stunned Oklahoma-born singer-songwriter and judge on the musical reality TV series “The Voice.”

“I know I’m not out there (touring) as much, and I don’t know how this happened — but I freakin’ love it.”

The three-hour awards show in Music City’s Bridgestone Arena was peppered with mentions of the brutal storm that pummeled New Jersey, New York and other parts of the eastern United States earlier this week.

Jason Aldean, the opening act, dedicated the evening “to all our friends on the East Coast.”

“Country music has always lifted people up in hard times,” said Underwood, who encouraged viewers of the nationally televised gala to help Sandy survivors with donations to the American Red Cross.

Tennessee and neighboring Kentucky and Mississippi were themselves gripped by torrential rain and devastating floods in May 2010 that left at least 30 people dead.

Eric Church took album of the year for “Chief” after performing his biggest hit single “Springsteen,” onto which he tacked some lines from the Boss’s classic “Born to Run.”

Lady Antebellum, standard bearers of a new generation of country artists, led a musical tribute to the legendary Willie Nelson, 79, who himself took to the stage with “On the Road Again.”

“It’s a great award,” Nelson said. “I love all of you out there. Thank you. I appreciate it.”