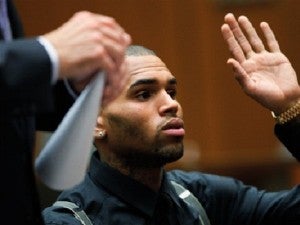 In this pool photo R&B singer Chris Brown appears in court in Los Angeles Thursday, Nov. 1, 2012. Brown remains on supervised probation for felony assault for an attack on Rihanna in 2009. He is scheduled to return to court Jan. 17, 2013. A California judge says Chris Brown must return to court to update her on the progress of his probation after he completes an overseas tour. (AP Photo/David McNew, Pool)

LOS ANGELES—A judge on Thursday ordered Chris Brown to remain on supervised probation and make another court appearance after he completes an overseas tour.

Superior Court Judge Patricia Schnegg did not address questions raised at a previous hearing about whether the R&B singer had completed the terms of his community labor sentence.

A prosecutor said a report filed for Thursday’s hearing did not add additional details about Brown’s service as previously requested by the court. Instead, it included the same spreadsheet of Brown’s hours that Schnegg called “somewhat cryptic” at a September hearing.

Brown remains on supervised probation for felony assault for an attack on Rihanna in 2009.

He is scheduled to begin a tour that spans several countries in Europe and South Africa on Nov. 14.

Brown “appears to be making a sincere effort to comply with terms and conditions of probation,” a probation officer wrote in a report prepared for Thursday’s hearing. The report recommended that Brown remain on probation under the same conditions he has abided by since pleading guilty to the attack on the eve of the Grammy awards.

Brown appeared at the hearing along with his mother and attorney Mark Geragos. He did not speak during the proceedings, and when he attempted to at one point during discussions of his schedule, Geragos joked, “I don’t dance, you don’t talk.”

Brown is scheduled to return to court Jan. 17.

Read Next
Police: Actor Hackman knew homeless man he slapped
EDITORS' PICK
Senate bill seeks to penalize employers requiring employees to work during rest hours
Gear up and get ready to play with Yamaha Mio Gear
Acer starts the year off strong with the Aspire Vero National Geographic Edition
If elected VP, Sara Duterte will push for mandatory military service for all Filipinos
Over 3 Million worth of prizes to be won at Smart Padala’s SENDali Manalo Promo!
Marcos-era elections: Not what his son signed up for
MOST READ
Vice mayor slams Vico Sotto for turning Pasig into a ‘puro palabas’ city
‘Sampal sa gobyerno:’ Drilon wants unvaxxed PAO chief barred from working
Jose Manalo’s son Benj pays tribute to late mother: ‘You’re a testimony of God’s love’
Guevarra to Acosta: Obey rules on unvaccinated
Don't miss out on the latest news and information.