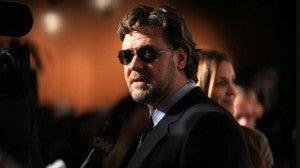 SYDNEY – Hollywood star Russell Crowe and his wife Danielle Spencer have split up, a report said on Monday, with speculation that the Oscar-winning actor could face a US$25 million settlement.

The couple have been married nine years and separated amicably, the Sydney Morning Herald said, with both determined to protect their two children, aged eight and six, from any publicity.

Neither Crowe nor his Australian wife have yet made any public comment.

Rumors that their relationship was in trouble surfaced in June this year when photos appeared showing Spencer on a night out with her partner from television show “Dancing With The Stars”, Damian Whitewood.

The pictures reportedly showed Spencer and Whitewood with their arms wrapped around each other in Sydney.

According to the Herald, Crowe is in the United States filming the biblical epic “Noah”, while Spencer remains in Sydney with their two sons.

The pair first met 22 years ago on the set of “The Crossing”. They broke up and Crowe headed overseas to find work where he had a well-publicized affair with US actress Meg Ryan.

But he returned to Australia and proposed to Spencer, a singer, in 2002.

The Herald said Crowe has earned about US$150 million making films in the years since they married and speculated that Spencer could conservatively walk away with a settlement of at least US$25 million.

As well as being a Hollywood heavy-hitter, Crowe, who last year splashed out US$10 million on a Sydney house to live in with Spencer, part-owns an Australian rugby league team.

As well as his six-bedroom Sydney home, he has a luxury apartment in the city and a valuable 320-hectare rural property near Coffs Harbour, in New South Wales state.

Born in New Zealand, Crowe, who won an Oscar for role in Gladiator, has lived in Australia since he was a small child.