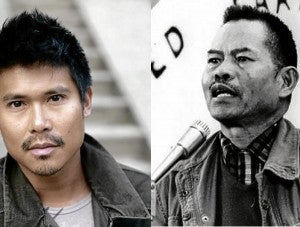 LOS ANGELES—“I know that it was always important to Diego Luna and Mike (Michael) Peña to give the Filipinos their due in this film,” stressed actor Darion Basco in a recent interview. He plays Filipino-American labor leader Larry Itliong in “Chavez,” which Diego directs and Michael stars in as the titular character.

After talking to Michael about playing Cesar Chavez, the Mexican-American civil rights activist and farm labor organizer in Toronto (featured in our column last Sepember 15), we sought out Darion for his take on “Chavez,” which is first and foremost a biopic on the man, who died in 1993.

However, based on our interview with Michael and now, Darion, Diego and his writer, Keir Pearson, appear to acknowledge the Filipinos’ contribution to the farm labor movement in the 1960s and ’70s in the film.

In real life, Cesar collaborated with other Filipino labor leaders like Philip Vera Cruz, Andy Imutan and Pete Velasco but the film seems to focus on Larry’s partnership with Cesar in the movement. In 1965, Larry, who was born in Pangasinan, helped organize the Delano, California Grape Strike to protest the farmers’ poor working conditions.

Darion is the second oldest among the talented LA-based Basco siblings—all actors—who went home to the Philippines to shoot a documentary, “The Basco Balikbayan Project: A Journey To Our Roots.”

Incidentally, the Third Annual Larry Itliong Day will be observed on Oct. 20, 11 a.m. to 2 p.m. at the South Bay Pavilion in Carson, California. The free event, which celebrates the legacy of Larry and his significant contribution to the farm workers’ movement, is presented by the Filipino American National Historical Society, Los Angeles Chapter and the Larry Itliong Foundation on Education. Several officials of Carson will make a proclamation to honor the Larry Itliong Day.

Below are excerpts from our interview with Darion: 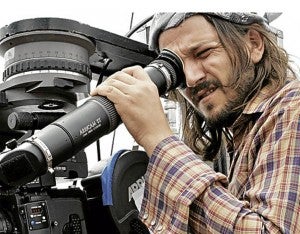 How did you land the role in “Chavez”? Did your brothers also try out for the role?

My brothers and I auditioned with Heidi Levitt, the brilliant casting director. She brought us to meet with Diego.

It sounds promising that director Diego Luna and writer Keir Pearson appear to give credit to the role played by Filipino-Americans in the farm labor movement in the ’60s and ’70s. Can you comment on how the script evolved?

It is indeed very promising and I know that it was always important to Diego Luna and Mike Peña to give the Filipinos their due in this film. I can’t speak so much on how the script evolved as I wasn’t [very] involved in that, but we did do our best to show the invaluable role that Filipinos played in the movement, including going on strike first and forcing Chavez and his contingent to follow suit.

There’s concern in the Filipino community that the contributions of the Fil-Ams in the farm labor movement might be glossed over or might not be accurately depicted.

Well, like you said, it is promising that they did include Larry Itliong in the film as one of the leaders of the movement. That said, it is a movie about the life of Cesar Chavez so the film doesn’t include other Filipino heroes of the movement—such as Philip Vera Cruz, Andy Imutan and Pete Velasco. If we did a film, from our point of view, the story no doubt would include all of these manongs.

Several Fil-Am farm labor heroes collaborated with Cesar Chavez. What led to the decision to include Larry Itliong as a main character?

The creative team really loved Larry Itliong. In the research materials, it was obvious that he was a brilliant, charismatic leader and without him, the movement could not have been what it was. He was an experienced labor organizer and like I said, in many ways, led Cesar into the strike and kept the union together, representing the Filipino side.

Are there other Filipinos in the cast?

The other Filipino actors in the film are my family. My brothers and sister, parents, aunts and uncles came down to Mexico to represent the Filipinos in the film. That was an incredible experience to have them all down there with me.

Are Tagalog or other Filipino dialects spoken in the film?

We spoke a bit of Tagalog in the film. Having my family there was very helpful; I learned Tagalog phonetically.

How did you research for the role? Did you talk to the Itliong family?

There was a research team with the film that gave us material to read and watch. I went to Joel Jacinto at Sipa (Search to Involve Pilipino Americans) and he put me in touch with Johnny Itliong, Larry’s son, and Marissa Aroy. Talking to Johnny about his father was a wonderful source and Marissa is a documentary filmmaker who has a film about Larry’s life that’s almost finished, “The Delano Manongs,” so she had rare material that she shared with me.

What can you share about Michael Peña’s performance as Cesar Chavez?

From what I’ve seen so far, he’s terrific…and he really took this role and project seriously.

This is Diego Luna’s second feature directing job. Since he is an actor, too, how does that help him as a director?

Diego was amazing to work with. He’s easy to trust. You really feel he’s there and supporting you as an actor, very open and communicating. He also had a strong sense of the story that he wanted to tell.

What were your interesting experiences shooting in Mexico?

There wasn’t much to do in Hermosillo. So the cast, which was incredible—many of us had [met] previously—got to hang out and know each other better.

Did the other actor-producers, Gael Garcia Bernal and John Malkovich, visit the set?

John Malkovich has a role in the film and I was lucky to be in a couple scenes with him. He’s definitely a master. And Gael did make an appearance but I wasn’t on set at that time.

You and the family went home to shoot “The Basco Balikbayan Project: A Journey To Our Roots.” What was that like?

That was a real life-changing experience. I had never been [to the Philippines]…We traveled all over the islands but the highlight was going to Pangasinan and Zambales, where our families are from. We went to the [place] where my grandfather built a bahay kubo for my grandmother after they were married. We saw the tree my father climbed as a child.

What did you learn about yourself in that trip?

I learned the richness of my heritage and gained a real appreciation of where we come from and the incredible journey that our family made to get us where we are and give us the opportunities that we have.

Did that help you in any way portray a Filipino in “Chavez”?

It grounded me in that journey that Larry Itliong made to forge his life in the United States. In many ways, his journey mirrors those of my own grandfathers.

What are your other projects?

E-mail the columnist at [email protected] Follow him at http://twitter.com/