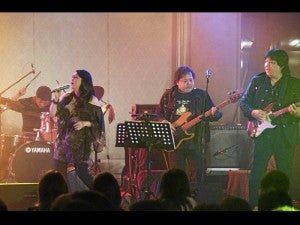 That intriguing question was answered—and other trivia about many Hotdog hits were revealed—by the band’s co-founder, bassist and main songwriter Dennis Garcia in a recent e-mail interview.

The band that helped pioneer the “Manila Sound” in the 1970s will stage a repeat of its successful reunion concert (held last May) on July 26 at the grand ballroom of the Dusit Thani Hotel in Makati. Dennis’ anecdotes makes us wish we could be there on Tuesday night to experience Hotdog music one more time.

Can you share little-known anecdotes about each of these Hotdog hits?

“Pers Lab.” The band was scheduled for a recording in 1975. We were expected to record a whole album in just one day (that’s how “important” and “pampered” bands were to recording companies in those days!). The night before, we still lacked one song.

Frantically, I scribbled a few lines, took out Tagalog words that were too “kundiman-ish” and the band pitched in for the missing tune. I embellished it with a title that was quite left-field—in keeping with the quirkiness of Hotdog.

“Ikaw ang Miss Universe ng Buhay Ko.” Rene and I were at home in mid-1974—fresh from a year’s stint in Waikiki. We were a bit frustrated because during that Waikiki gig, a Warner A&R was so impressed with our band, RedFox, that he was egging us to record a demo. Unfortunately, we had no original material. While watching the Miss Universe pageant, I said aloud, “Kawawa naman ang mga walang Miss Universe face.” Rene and my mom laughed. On the spot, Rene and I agreed to write a song based on that casual remark.

“Bongga Ka ‘Day.” My four sisters are all closet “badings.” And this was one phrase that Rene and I heard over and over again at home. To get the ever-recurring line out of our system forever, Rene and I created this song—at a time when Eloy’s reigned supreme and “ukay-ukay” was still a word waiting to be discovered.

“Annie Batungbakal.” Rene and I crafted this gem while on a six-month performing contract in 1978 at the Hong Kong Hilton. It was a tribute to Pinay domestics who were truly “bonggacious” during their days off—so flashy, you wouldn’t think they were cooking, washing clothes, changing diapers and dodging employers’ fists on their working days. Aside from being a tribute, this was also a commentary on our youngest sister (Gina) who was at Coco Banana night after night dancing till dawn, unmindful that she had to be at work the next day in an ad agency at 9 a.m. sharp. She was—rightfully—the “muse” of this classic tune.

“Behhh, Buti Nga.” Every nerd’s fantasy song. You know, the poor guy who’s always being ignored by Assumption girls just because he isn’t good-looking, takes the jeepney and his school ID doesn’t say “La Salle.” This is sort of autobiographical but became a hit because it resonated with a lot of fellow “na-isnabers.” Inevitably, this song was banned in Assumption.

“Bitin Sa Iyo.” True story. At the height of my stint as a “rocker” with RedFox, I refused to hold hands in public with whoever was my current squeeze. Rene had no such problem (He got married at age 18 — behhh, buti nga). So the insight-cum-bad habit (“ayaw man lang makipaghawakan”) endeared this song to a lot of ignored sweethearts.

“Langit Na Naman.” Rene and I wrote this for my wedding in 1979, the highlight of which was having Nora Aunor sing the tune at the reception. At that time, Rio Locsin was every full-blooded Pinoy macho man’s fantasy. Thus, her name found its way into the song. It’s a terribly underrated song since it was swept aside by “Annie Batungbakal” and “Bongga Ka ’Day” on radio.

“O, Lumapit Ka.” I hold no grudges. Ever. Life is too short to be angry or spiteful. When Ella del Rosario left the band, I decided to give her a helping hand by writing [the Tagalog lyrics] and producing her single “O, Lumapit Ka” [an adaptation of Antonio Carlos Jobim and Joao Gilberto’s “So Em Teus Bracos”] in 1977. One phone call to Vic del Rosario was all it took to green-light this project. I would like to add that “Ikaw Pa Rin” [another Tagalog adaptation, from Harry Warren and Mack Gordon’s “There Will Never Be Another You”] followed immediately, which I produced for a talent I chanced upon—Tito Mina.

“Manila.” The mother of all Hotdog hits. Used around the world—almost daily—without remuneration or permission. But that’s our lawyers’ problem. Rene and I were enamored with the song “I Left My Heart in San Francisco” and felt our favorite city should also have an anthem of its own, a tune that will last forever. Looks like we got ourselves a self-fulfilling wish.

Your songs were very much of the era they were composed in but they have endured. Are you surprised?

Not surprised at all. All our songs were based on universal human emotions and those feelings never go out of style. We’ve made it a point to write songs with real insights and not just words stitched together like “I love you… the sky is blue…”

What was your reaction when you first learned that President Benigno Aquino III was coming to the first reunion concert?

It wasn’t the biggest surprise, really, since we found out from the producers that our good friend Mar Roxas bought some tickets and, uncharacteristically, wanted to know the seating arrangements and other particulars. We added one plus one and guessed that the PSG was going to pay the hall a visit. Bingo! It was nice of the President to take time off to listen to OPM—and not some expensive foreign act.

Another VIP guest eagerly waited for the event to happen but unfortunately was unable to come because of an emergency meeting in Singapore. But he sent his wife and around 20 of his friends to represent him. The man called Gibo.

Any new or different material that you are adding to this next show?

Three former singers flew in from abroad: Gina Montes from the UK, and Nadia Moore and Elaine Evangelista from Canada. We’ve added several tunes. There’s a ditty called “Sana’y Maganda Ako,” an original Hotdog song performed once by the Reycards in 1976. We’re also doing my solo composition, “You Make Me Blush (Parang Pulang Kamatis),” arranged by Rene and Maso Diez—a la Andrew Sisters, with all the girls participating.

There’s also our newest composition “Rewind” which pretty much captures the essence of wanting to go back to a particular time in one’s life to relive magical moments.

How about an album of all-new material, including an update on Annie Batungbakal, 30 years later?

That’s in the works. Like before, every tune will be topical, using the lingo of the times. Annie? She’s a Facebook addict now, looking up all her friends who used to rush to the dancefloor at the first notes of Voyage’s “Souvenirs.”

Looking back at the band’s run, do you have any regrets?

Well, there’s a bit. I should have campaigned vigorously to limit the airplay of foreign songs. In the mid ‘70s, local songs dominated radio. Imported recordings took a back seat, even in sales. But that was then. Today, our musicians and songwriters are back to being second-class citizens in their own country.