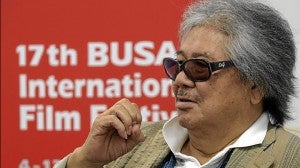 BUSAN, South Korea – Asian Filmmaker of the Year Koji Wakamatsu has said a lack of government support for young directors in the region is stifling artistic freedom.

“Only commercial films are being supported by government funds in Asia so young filmmakers are only making commercial films,” said Wakamatsu, who received the Busan International Film Festival honour for his contribution to independent cinema.

“It comes back to the power of the multiplexes which will not screen smaller films,” the Japanese director told AFP late Saturday, adding that young filmmakers “should be given the freedom to make the films they choose”.

“Caterpillar” (2010), a savage critique of Japan in the 1930s, was nominated for the prestigious Silver Bear award at the Berlin International Film Festival.

In the past year, the 76-year-old has directed three productions – “11.25 The Day He Chose His Own Fate”, “Kaien Hotel in Blue”, and “The Millennial Rapture”.

The Busan festival handed Wakamatsu its Asian Filmmaker of the Year Award on Thursday to “honour his spirit of independent film as a rebellious auteur and his never-ending passion for cinema”.

“I think my films are undervalued in Japan so this is a great honour for me,” said Wakamatsu.

“I am an independent filmmaker and this goes against the system in Japan. But you have to make the films that are in your heart not films other people want you to make.”

“I wanted to tell them that I have not changed since I started in cinema,” said Wakamatsu. “My intention was to talk to the people of Japan. Cinema is freedom and this must never change.”

The 17th edition of the Busan festival, which is this year screening more than 300 films over 10 days, comes to a close on October 13.