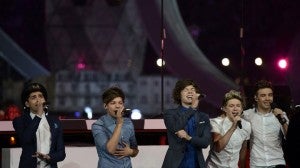 British group One Direction performs during the closing ceremony of the 2012 London Olympic Games at the Olympic stadium in London on August 12, 2012. AFP FILE PHOTO

The band is composed of  Niall Horan, Zayn Malik, Liam Payne, Harry Styles and Louis Tomlinson. Among their hits are “Na Na Na,” “One Thing” and “What Makes You Beautiful.”

Penshoppe recently brought Hollywood A-lister Zac Efron to the Philippines as one of its international endorsers.