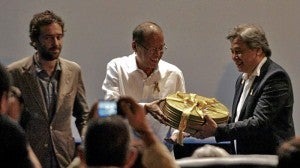 TURNOVER Alfonso Tagliaferri of the Italian Embassy hands over reels of the film to President Aquino and FDCP chair Briccio Santos. photo:rodel rotoni

Although he couldn’t stay for the premiere screening of the digitally restored “Genghis” film due to prior commitments, the President’s surprise participation in the turnover ceremony signified the government’s strong commitment to restore and conserve our cultural treasures for future generations.

“It affirmed the President’s support of our cause to preserve our cinematic heritage,” FDCP chair Briccio Santos told the Inquirer. “He led the Filipino people in welcoming a long-lost film back to our shores.”

In April, the President signed Administrative Order No. 26 which enjoins all agencies, departments and offices under the executive branch (including government-owned and -controlled corporations) to transfer their collections to the NFAP, which now serves as the country’s official repository of audio-visual material.

According to Santos, the support of the Office of the President has bolstered the NFAP’s collection, which now contains 10,000 audio-visual materials from various institutions like the University of the Philippines Film Institute, Mowelfund and film companies LVN and Sampaguita.

Government-controlled network IBC 13 has likewise turned over its library, which contains 6,000 video tapes of classic movies and television productions, to the NFAP.

The FDCP also hopes to house the collections of the Philippine Information Agency, PTV4 and RTVM in NFAP facilities.

President Aquino, who wanted to watch “Genghis,”  requested a DVD copy of the restored classic from the FDCP. The film was digitally restored at the world-renowned laboratory L’Immagine Ritrovata, based in Bologna, Italy.

“We look forward to securing arrangements for him so that he can watch it on the big screen at his convenience,” said Santos.

The FDCP plans to screen “Genghis” in SM cinemas nationwide and its own Cinematheques in Baguio, Davao, Iloilo and Marawi, as part of its goal to popularize the cause of film preservation among the masses, particularly the youth, said Santos.

Italy was represented at the turnover ceremony by Stefano Francia di Celle, retrospective curator of the Venice fest; Davide Pozzi, director of L’Immagine Ritrovata; and Alfonso Tagliaferri, first secretary of the Italian embassy.

Last September 6, the digitally restored “Genghis” was screened at the Venice fest to an SRO crowd composed of cineastes, critics and journalists, Di Celle recalled.

“The audience was impressed by the film,” Di Celle recounted. “They were surprised that a film made in 1950 possessed such an original wit and style. It presented a novel way of movie-making.”

Di Celle remarked that the Venice audience was astounded that the film looked lavish even though it was made with a modest budget. “‘Genghis’ has proven that budget is not everything.”

Like its hero, the film exemplified ingenuity and a daring, innovative spirit, Di Celle said.

“We spent 1,500 hours, roughly four months, in restoring the film,” Pozzi related. “It was a painstaking process for the 48 experts who worked on the film.”

But seeing “Genghis” restored to its former glory made all the hard work worthwhile. “It was an emotional journey for us as well,” Pozzi said.

Urbano was visibly touched by FDCP and Venice’s efforts to save his father’s film. “My heart is about to burst with joy,” he said. “My late dad never acted like a big shot. At home, he was just dad—playful and humorous.” (Conde passed away in 1985 at age 69.)

The restoration and repatriation of the film made Urbano realize that “I have big shoes to fill … I am proud of my father.”

“Wow,” Urbano quipped, upon seeing a replica of his father’s statue by artist Jonas Roces, which was displayed at SM MOA, along with stills and posters of “Genghis,” last Saturday.

Conde’s bronze statue as Juan Tamad will be installed at the FDCP Cinematheque in Zamboanga, Santos said.

Conde’s daughter, Melody Urbano, said it was her first time to see her father and mother (“Genghis” leading lady Elvira Reyes) together onscreen after decades of looking at only old, faded photographs. She came with brother Noel and other relatives.

LVN screen queen Delia Razon, who co-starred with Conde in three films—“Apat na Alas,” “Satur” and “Señorito”—was awed by the restored film. “The restoration was done well,” Razon said. “Back in the old days, foreigners praised the movie, saying it was even better than John Wayne’s version.”