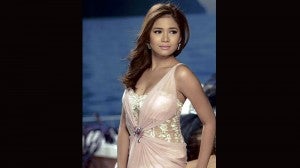 “My initial reaction to a negative comment was to feel hurt, but then I asked myself, what would I gain from thinking about it too much? I’m not meant for show biz if I’m not strong,” Louise told the Philippine Daily Inquirer on the set of the TV drama series “One True Love” in Loyola Heights, Quezon City.

She added: “A boss once told me that issues, whether good or bad, will always be there, and that people in this industry are known to play dirty. He said I should shield myself from them. It’s the only way to last in this business.”

According to the 19-year-old actress, she usually ignores “tolerable” criticism, but lets GMA Artist Center, which manages her career, take care of those she considers “foul,” especially comments on social networking sites.

“On Twitter, I simply block the bashers,” Louise said. “I would rather not give them the time of day. I’ve encountered posers who feed wrong information to my fans. They post schedules of rehearsals or mall shows that don’t exist at all.”

Prior to “One True Love,” the duo was seen in the suspense-thriller “My Beloved.”

In “One True Love,” Louise plays Elize, daughter of a lowly servant but whose fate changes when, as a baby, she was switched for someone else’s child and was made to live with a wealthy family headed by Carlos Samonte (Raymond Bagatsing). Elize meets Tisoy (Alden), a worker at a seaport owned by Carlos. They fall in love, not knowing that Tisoy is Carlos’ real son.

Written by Susan Doctolero and directed by Andoy Ranay, “One True Love” airs its last episode on Oct. 5.

What kind of ending do you prefer for the series?

We all like happy endings but in reality, things don’t always happen that way. I prefer an ending that’s real and believable, even though it could also be painful.

What could viewers expect from your character?

Elize loses her memory after her operation in the United States for a brain tumor. She will try to get to know every person important in her life all over again—like Tisoy, her parents and best friends. The script for Week 15 has just arrived. I was so surprised with what I’ve read—the fans of Elize and Tisoy won’t be pleased with what’s going to happen next.

Have you ever felt this way toward a person—someone you try hard to forget, but still holds a special place in your heart?

I’ve never really had a serious relationship before. But I can say I’ve felt that way toward people who turn me down—those who said I don’t have what it takes to be a successful actress and I would never become popular. I’ve learned to forgive them but I couldn’t really forget them. I keep working hard to prove that all the things they’ve said about me are wrong.