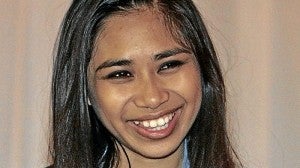 JESSICA Sanchez was the best singer on “American Idol, Season 11.” When it comes to shining in press cons, however, Jessica is still a tyro. When “AI’s” Top 10 met the press at the Manila Hotel to promote their recent concert at the Araneta Coliseum, she spoke confidently for a 17-year-old, but her replies were full of generalities and motherhood statements.

I asked her what it was like performing at the Democratic National Convention, where former president Bill Clinton was present. She said she was shivering, and that was all she could say. She said she wasn’t disappointed when she got the lowest number of votes during the Top 7 competition and would have been glad to go home. She was surprised when the judges came onstage to save her from elimination. Again, more generalities and few details.

In time, she should be able to learn to give more details, relate anecdotes about events, and even crack jokes. I did get some interesting trivia from her: She’s not a fan of Mexican cuisine, because her mom only serves Filipino food at home. I guess her dad, who’s Mexican, doesn’t cook. Her favorite Pinoy dish is sinigang na baboy. She only knows one Filipino song, “Ikaw.”

I asked her about her coach, who got a car during the finale. She said she didn’t have a coach—she called him his mentor. She clarified that it was her mom who had helped her with her singing. So, I asked if her mom was a singer. She replied in the negative, but said she was the one who really drove her to succeed.

Although she’s staying one week longer than the other Idols, Jessica says she’ll have too little down time to visit her hometown in Bataan.

What will keep her busy after the concert? Just like the other Pinoy Idols before her, Jessica was able to bag some endorsements from local companies. She’s doing an ad for Bench, and there’s talk that Jollibee has signed her up. (She is, however, mum on this matter.)

Asked about published stories that she might be doing “Miss Saigon,” she replied that there’s been no formal offer. She has seen the musical and would like to audition if given the chance. She’s appeared in high school plays in Chula Vista, California, but she hasn’t done any musicals. She also admitted that there are on-going talks about her doing solo concerts in the country.